LAS VEGAS – Teofimo Lopez admits it provided more motivation when he accepted less money than he thinks he is worth for his showdown with Vasiliy Lomachenko on Saturday night.

Lopez clarified during an interview with BoxingScene.com, however, that Lomachenko did not sacrifice a portion of his purse so that Lopez could be paid more to finalize their deal. Bob Arum, whose company, Top Rank Inc., promotes Lomachenko and Lopez, intimated to several outlets early in August that Lomachenko made financial sacrifices to make their lightweight title unification fight a reality.

“He never gave me money,” Lopez told BoxingScene.com following a press conference Wednesday night at MGM Grand Conference Center. “I don’t know why people keep saying that sh-t. I thought I cleared that out a long time ago. It’s crazy, man. Nah, man, my pride kicks in when that happens. I won’t ever take somebody else’s paycheck. You know what I mean? 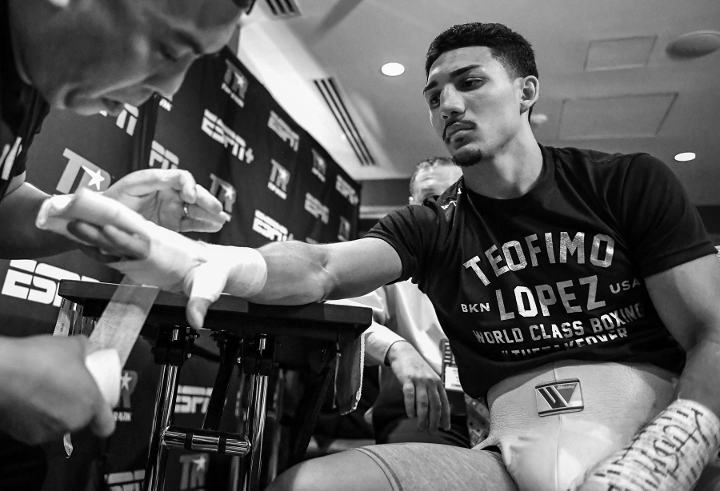 Lopez expected to be paid more than the reported $1.2 million he initially was offered for fighting Lomachenko. The economic impact of the COVID-19 pandemic devalued one of the most significant fights in boxing partially because it removed ticket revenue from the financial equation.

Arum informed BoxingScene.com over the summer that he expected to make approximately $1 million in ticket sales had the fight taken place as planned May 30 at Madison Square Garden.

Arum had hoped to sell out The Garden for Lomachenko-Lopez. Instead of packing “The Mecca of Boxing” with roughly 20,000 fans, Lomachenko and Lopez will box before a crowd of approximately 250 people at MGM Grand Conference Center, the maximum allowable by the Nevada State Athletic Commission.

ESPN executives ultimately decided to televise Lomachenko-Lopez live on ESPN, rather than offering it on pay-per-view or ESPN+, which enabled Top Rank to offer Lopez more money when negotiations got contentious.

“Everything motivates me,” Lopez said. “Usually it just takes one thing to light up that fire that I need to do what I do in there. In this camp, man, I’ve got like seven things that have lit my fire.”

Lomachenko-Lopez will headline an eight-bout card that’ll be televised live on ESPN and ESPN Deportes and streamed on ESPN+, starting at 7:30 p.m. ET/4:30 p.m. PT.

“Despite everything, him and I both said that we would make the fight happen in 2020,” Lopez said. “We didn’t expect COVID to hit and the pandemic to definitely make this a long stretch. But at least we were able to get it towards the end [of the year].”

Oh you're that guy? So Jeff horn is better than Pacquiao too right? Haha come on man. And sure Holyfield was a small heavyweight. Making it even more impressive what he was able to accomplish.

[QUOTE=Topdogggbm;20816222]Did you read anything that I wrote? It has nothing to do with that. But since you mention it anyways..... [B]Spinks, Holmes[/B], Bruno, Tubbs, Berbrick, Tucker, Biggs, all solid names. Even Botha, Golota, and Mathis Jr were quality opponents. [/QUOTE]…

[QUOTE=Rick Taylor;20815656]who did tyson beat in his prime that wasnt a bum?[/QUOTE] Did you read anything that I wrote? It has nothing to do with that. But since you mention it anyways..... Spinks, Holmes, Bruno, Tubbs, Berbrick, Tucker, Biggs, all…

[QUOTE=Topdogggbm;20815466]The aura around Mike Tyson, relies heavily on what he meant to the world at that time. Mike Tyson fights were global events. Everyone knows where they were for his fights. People gathered. Sometimes just that value alone can move…

[QUOTE=ladiesman217;20812658]Why does it seem not fair that Loma had to be in 3 separate championship bouts to grab each of his 3 belts while Lopez has a chance to grab all 3 of those titles after only one championship fight…