Teofimo Lopez: Just Being In Top 10 P4P Fine With Me; Still Got A Lot More To Do

LAS VEGAS – Teofimo Lopez isn’t consumed with where people place him on their pound-for-pound lists, just as long as he is on everyone’s list now.

He has earned at least that, according to Lopez, by out-boxing Vasiliy Lomachenko on Saturday night in their 12-round, 135-pound title unification fight. Lopez won what was supposed to be the most difficult fight of his career by huge margins on two of the three scorecards (119-109, 117-111, 116-112) and became the youngest fully unified champion in boxing’s four-belt era.

Lopez produced his career-changing victory versus a three-division champion who was consistently listed as a 4-1 favorite before a main event ESPN televised from MGM Grand Conference Center.

“Top 10. I’ll be in the top 10,” Lopez replied when asked about his pound-for-pound status during a post-fight press conference. “That’s fine with me. I’m OK with that.” 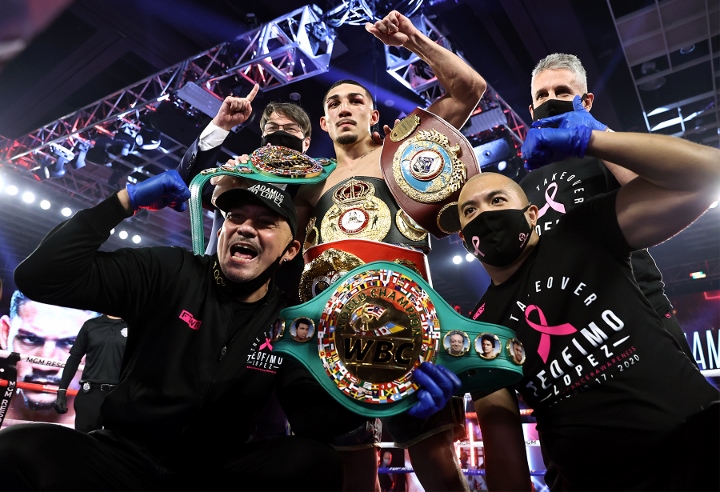 BoxingScene.com lists Lomachenko number one in our most recent pound-for-pound rankings. ESPN.com placed Lomachenko in the top spot on its newest list as well, whereas The Ring magazine most recently ranked him second.

The 23-year-old Lopez (16-0, 12 KOs) became the first fighter to defeat Lomachenko since the two-time Olympic gold medalist lost a split decision to Mexico’s Orlando Salido in their 12-round, 126-pound championship match 6½ years ago at Alamodome in San Antonio. The 32-year-old Lomachenko (14-2, 10 KOs) had won 13 consecutive bouts before Lopez beat him.

Lopez proudly pointed out that he proved plenty of skeptics wrong by beating the highly skilled Ukrainian southpaw, who was very cautious and inactive during the first half of their fight. Otherwise, though, Lopez knows he has a lot of improvements to make before his next fight.

“We still got a lot more to do,” Lopez said. “You know, and there’s so much more that I wanna accomplish. This is just the beginning. You know, I’m not satisfied with this. I definitely wanna collect more. And I’m just gonna enjoy today, take it all in, and when I go to sleep, then I wake up, you know, I’m just gonna move on to the next thing. You know, what’s next? That task that I should, that I can achieve and overcome.”

Lopez is not going to last. Once he goes to 140 he won't have the weight advantage, nor reach, or height. Plus the the 140 are stronger and can take hard punches.

Top 10 for sure! Sky's the limit fornthis young man. Salud!

Teo will knock out Haney

Haney, Tank, Pedraza, or Zepeda! Go with the biggest payday! Arum already has MSG on lock the PR Parade Weekend! Lopez vs. Pedraza, and Berlanga vs. TBD would be real nice for the city!