Teofimo Lopez: It Saddens Me That The Loma Fight Isn’t At Madison Square Garden

As happy as he is to get his shot at Vasiliy Lomachenko on Saturday night, Lopez cannot help but wonder what it would’ve felt like to battle Lomachenko inside a packed Madison Square Garden. Lopez and Lomachenko were supposed to meet at that iconic venue in Manhattan on May 30.

Brooklyn’s Lopez had hoped they would sell out 20,000-seat Madison Square Garden. Instead, the Nevada State Athletic Commission will allow a maximum of 250 fans to attend the seven-fight card headlined by Lomachenko-Lopez. 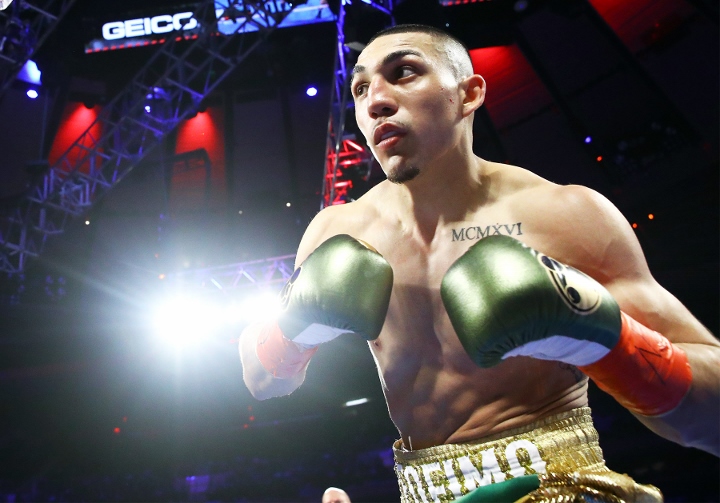 The crowd will consist of first responders from Nevada, as well as family members and friends of the fighters.

“It saddens me that it won’t be at Madison Square Garden,” Lopez told BoxingScene.com. “It saddens me that it won’t be a sold-out arena, with so many great fans that we have, and so many celebrities and so many different athletes in that whole arena that night. But we still know that the fans are gonna be watching back at home. It’s gonna be live on ESPN, and you don’t even have to pay a dime [on pay-per-view]. So, everything happens for a reason. You know what I mean? All I know is that after this fight, I’m going back to Madison Square Garden, and I’m bringing back five more belts.”

Lopez, 23, has fought four times at Madison Square Garden and twice within MSG’s Hulu Theater. He knocked out Ghana’s Richard Commey (29-3, 26 KOs) in the second round December 14 at The Garden to win the IBF lightweight title.

“It really doesn’t disappoint me,” Lomachenko told BoxingScene.com through a translator. “The most important thing is we have a ring, we have the judges, and everybody can see the fight on TV.”

ESPN and ESPN Deportes will televise the Lomachenko-Lopez card in its entirety. The first fight is set to start at 7:30 p.m. ET/4:30 p.m. PT.

Unless it results in a draw, Lomachenko or Lopez will walk away with the IBF, WBA, WBC franchise and WBO championships. Lopez mentioned bringing back five titles to Madison Square Garden because they’ll box for The Ring magazine’s lightweight title, too.

It's a shame. The Garden would have been lit for that fight.