Teofimo Lopez: I'm Very Outspoken Because I Believe In My Abilities

Teofimo Lopez is going to keep talking until someone is able to make him eat his words.

There are many in the industry undoubtedly expecting—if not hoping for—that moment to take place this weekend, as the unbeaten Brooklynite faces one of the sport’s very best. Lopez enters the first defense of his lightweight title reign in a multi-belt unification clash with Ukraine’s Vasiliy Lomachenko (14-1, 10KOs), live this Saturday on ESPN from The Bubble at MGM Grand in Las Vegas.

The bulk of the promotion has come from the mouth of Lopez, who has insisted for as long as the fight has been discussed that it will undoubtedly end in knockout. It’s a bold claim considering Lomachenko’s one loss came in his second pro fight, a razor-thin decision to Orlando Salido who blew weight and vacated his featherweight title before proceeding to flirt with disqualification in edging out the gifted southpaw. 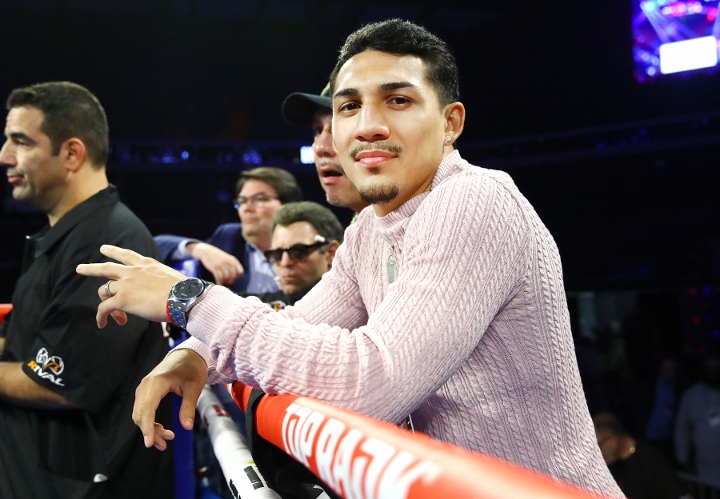 Since then has come a meteoric and historic rise for Lomachenko, who has won major titles in three weight divisions and brings a bunch of lightweight belts into the ring this weekend. Lopez is well aware of what he has talked himself into, and is fully prepared to back up every last claim.

“When it comes down to it, no matter what’s going on outside the sport, what’s going on with the people and the fans, there’s only two people who can determine the outcome – myself and the person I’m fighting,” Lopez noted during a recent Zoom media conference call to discuss the World lightweight championship. “That’s where my confidence leads to who I am. At that particular moment, I’m at home. I get to do what I can do. Nobody can tell me anything. I’m very outspoken because I believe in my abilities. I’m the one that’s going to dictate that fight and put it on the line. If you guys don’t like the way I am… this is just who I am. This is the person I am.”

While many admire his bold confidence, there are perhaps an equal if not greater amount of observers who are put off by his words. What matters most, however, is his actions and that is where Lopez always manages to get the job done.

The most recent example came in the manner in which he claimed the title. Lopez (15-0, 12KOs) tore through exiting lightweight titlist Richard Commey, knocking him out in the 2nd round of their ESPN-televised clash last December at Madison Square Garden in New York City.

Still, the 23-year old continues to find detractors at every turn.

“This is just the way it is in the sport,” laments Lopez. “I’ve learned to accept that. I’m very thankful that I have this confidence. I’m a believer in that you are what you are say you are.

“If you say you are the best, you have to show it out there and do it every time. And that’s what I’m going to do, show it every time.”

I believe he just proved his boxing skills

A boxer.... who talks trash??? REALLY? Dang, who would ever have heard of such craziness before Lopez, What a glass ceiling buster. What a trendsetter. What a unique take on boxing. I am glad there are not just cookie cutter…