In front of a sold-out crowd of 5,312 at the Hulu Theater at Madison Square Garden, Teofimo Lopez (11-0, 9 KOs) showed why, at age 21, he is the sport's fastest rising star, knocking out Mason Menard with a right hand at only 44 seconds of the opening round. Menard (34-4, 24 KOs) fell face-first, and the fight was immediately waved off.

"I knew he was a tough fighter. I knew he could fight," Lopez said. "I wanted to test him, and I took a chance early in the fight. I know he trained hard, and he didn't want it to go that way. But this is 'The Takeover.' 'The Takeover' has begun. 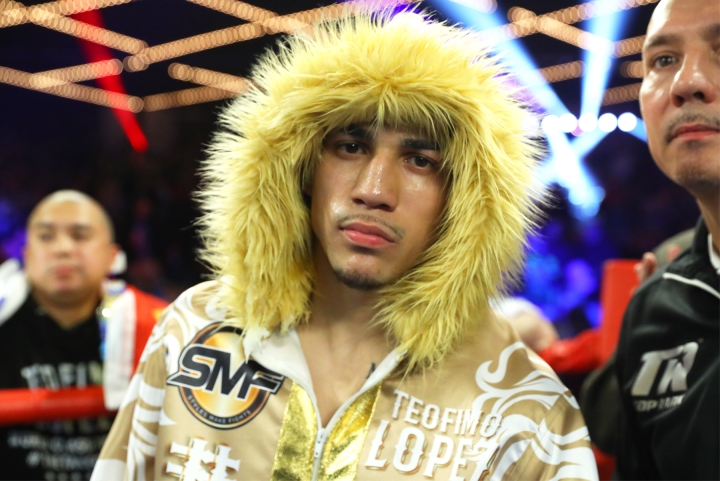 Emanuel Navarrete beat the long odds and stunned the rising superstar, Isaac Dogboe, via unanimous decision to win the WBO junior featherweight world title. The scores (116-112 2X, 115-113) reflected the action, as Navarrete was the aggressor throughout the fight (photos by Mikey Williams).

WBA lightweight champion Vasiliy Lomachenko wanted to unify lightweight world titles. After 12 rounds, he got his wish, although WBO champion Jose Pedraza sure didn't make it easy and halted Lomachenko's eight-bout knockout streak in the process.

It was tactical fight, as Pedraza's long arms kept Lomachenko at bay for much of the night. In the 11th round, Lomachenko, turned up the heat, scoring a pair of body shot knockdowns as Pedraza barely survived the round.

For Lomachenko, it's on to the next challenge.

[QUOTE=ceylon mooney;19341113]Man I hope so. He wasn’t afraid to throw lomachenko to the wolves, but Lomachenko (and now Crawford) seem to be arums big exceptions. Wonder if he’ll let Lopez have a go at him. I can’t wait.[/QUOTE]He "threw Loma…

[QUOTE=Fidel456;19340100]He gets hit too much, look at his nose it's already messed up. I don't know if he'll make it past the level B fighters.[/QUOTE] So every man you see with a Teofimo nose on the street you would say…

If this kid lands on Lomo like Pedraza did it’s lights out. Hopefully this kid moves up to 140 soon he’s too big for lw

[QUOTE=Bronx2245;19340045]Loma won his fight, Teofimo Lopez won the night! I'd like to see him fight someone like Edner Cherry or Ray Beltran, and then fight Lomachenko! If Arum can't get Berchelt, Tank, or Mikey in the ring with Loma, then…

[QUOTE=Fidel456;19340100]He gets hit too much, look at his nose it's already messed up. I don't know if he'll make it past the level B fighters.[/QUOTE] Lololololol .... blame his father for his nose or his mother