Teofimo Lopez: I Know For A Fact Commey Didn't Want This Fight

NEW YORK – Teofimo Lopez doesn’t think Richard Commey would make the mistake of underestimating him based on Lopez’s last performance.

The undefeated Lopez even was critical of how he boxed against then-unbeaten Masayoshi Nakatani, whom Lopez soundly out-pointed July 19 in Oxon Hill, Maryland. Lopez still can’t see how his performance that night might’ve made Commey overconfident. 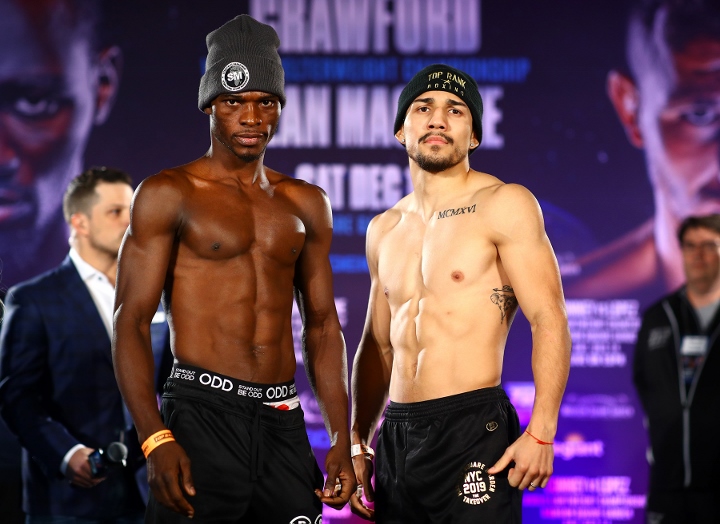 In fact, Lopez is convinced Commey doesn’t really want to fight him Saturday night at Madison Square Garden in New York. Commey had little choice, of course, as Lopez became the mandatory challenger for Commey’s IBF lightweight title by beating Japan’s Nakatani (18-1, 12 KOs) by unanimous decision in their 12-round, 135-pound elimination match four months ago at MGM National Harbor.

“I know for a fact that he knows one performance ain’t gonna cost me or boost up his confidence about who he’s facing,” Lopez told BoxingScene.com. “It’s just not. The guy knows that he’s fighting somebody that’s up there, and he can feel it. Whether he tries to show everybody that he isn’t intimidated by me or anything, I know, deep down, that he is, man. He didn’t want the fight, and I know for a fact he didn’t. But I’m the mandatory, so he had no choice. Either give up the belt and show people that he didn’t wanna fight me, and [make] a better name out there for me.

“Or just say, ‘F--- it,’ and face his fears and fight me. And that’s what he did, man. You know, if it was up to him, he would probably rather face Lomachenko than myself. And I don’t blame him. He’s trying to get the best that he could get. But I’m here, and I’m up and coming, man, and I’m taking over.”

Commey-Lopez will be the co-featured bout before Terence Crawford (35-0, 26 KOs) defends his WBO welterweight title against Egidijus Kavaliauskas in the 12-round main event. Lithuania’s Kavaliauskas (21-0-1, 17 KOs) is the mandatory challenger for the Omaha, Nebraska, native’s 147-pound championship.

[QUOTE=angkag;20255190]That's where I'm at too. Commey's defence isn't that great - he can be hit, but he has a chin and can bang back. My gut feel is Lopez lands big on Commey and avoids anything big coming back in…

What a silly thing to say before a fight. Commey is fighting tonight, isnt he? Lol Lopez is gonna win but he isnt easy to like.