Teofimo Lopez: I Was Injured Too, I Didn't Use Excuse Like Loma Did

In a recent interview, WBC Franchise, IBF, WBA, WBO lightweight champion Teofimo Lopez reflected back on the dramatic twelfth round of Saturday's fight with Vasiliy Lomachenko, at the MGM Grand's Conference Center in Las Vegas.

In a big upset, Lopez won a twelve round unanimous decision to unify their respective lightweight belts. 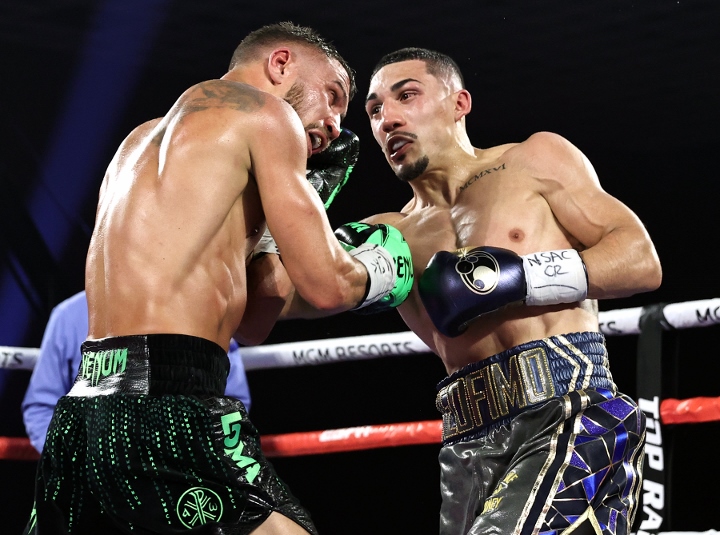 Lopez controlled the first half of the contest, before Lomachenko began to really pick things up in the eight round

In the twelfth, Lopez came out in full force as he turned up the gas to take the fight to Lomachenko.

"I saw that he wanted to throw with me, so I said 'okay, we're gonna throw together then.' But that's when the head butt came in, I got cut... he did some of his dirty tactics but we still got the job done.  I think we did it the best way that people didn't expect us to do."

It was revealed earlier this week, that on Monday Lomachenko underwent surgery for a right shoulder injury.

Lomachenko's handlers explained that he entered camp with a right shoulder issue and it affected his training.

But, Lopez indicates that he also entered the fight with an injury. He feels Lomachenko looks bad by disclosing that he was injured in the aftermath of the loss.

"The thing is, that people need to understand... I was coming into this fight injured as well.. if we want to talk about injuries, but I didn't make any excuses about it. This is just part of the sport, you are never going to come in at 100% in boxing or any type of combat sport. You're never going to be 100% going in there," Lopez explained.

"I think by him doing that [revealing the shoulder injury], as someone who was considered the best pound-for-pound boxer in the whole world, and to use that excuse - I think it just looks more bad on him than anything else."

[QUOTE=Doubledagger;20836025]If you really believe this info wasn't leaked intentionally then you are either incredibly naive or incredibly stupid. Either way, I think it says a lot that you guys are now attacking Lopez’s character. Can't attack his skills and resilience…

Except nowhere did Loma use an excuse or said anything about it. He had surgery to repair a problem. Teo needs to shut the hell up, he sounds like a moron.

[QUOTE=Silver Spear;20834419]Everything he has done since the fight has been announced has made him look like an idiot. One minute he is crying about his broken relationship with his father and the next he is praising him and saying he…