At just 23 years old, Lopez embraced a showdown with a three-division champion who was widely viewed as one of the top three boxers, pound-for-pound, in the sport. His unanimous-decision victory over favored Vasiliy Lomachenko was a star-making performance for a very confident fighter who wants unbeaten, talented lightweights like Gervonta Davis and Devin Haney to challenge themselves.

Lopez was particularly critical of Davis during his post-fight press conference Saturday night at MGM Grand.

“For everyone else out there, man, everybody is cherry-picking,” Lopez said. “Gervonta Davis, why you fighting Leo Santa Cruz? For what? That’s a 130-pounder, or a 126-pounder. That’s sad, man. And you guys hype these guys up for so many things, but it’s OK. It’s OK. Just put ‘em in front of me and I’ll beat ‘em.” 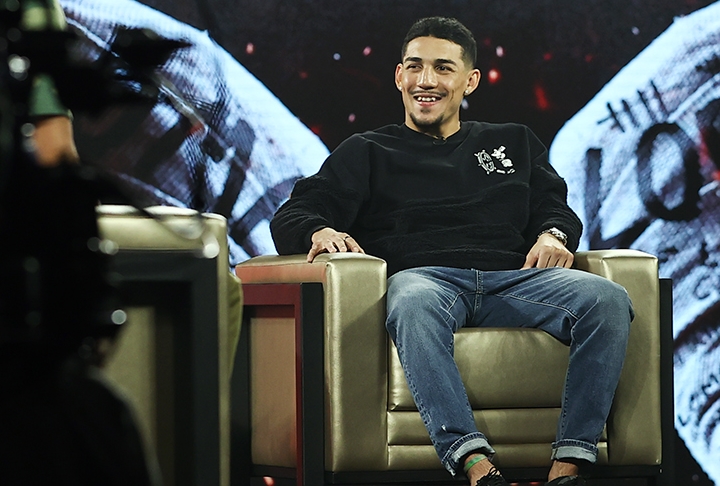 Baltimore’s Davis (23-0, 22 KOs) is nearly a 5-1 favorite to beat Santa Cruz (37-1-1, 19 KOs) in their 12-round, 130-pound title fight October 31 at Alamodome in San Antonio (Showtime Pay-Per-View). Santa Cruz is a four-division champion who has never been knocked out, but the Rosemead, California, resident has fought at the 130-pound limit only once and Davis has knocked out 96 percent of his opponents.

Lopez (16-0, 12 KOs) would fight Davis, Haney (24-0, 15 KOs) or Ryan Garcia (20-0, 17 KOs), if Garcia gets past Luke Campbell (20-3, 16 KOs) on December 5, next year because he wants to make the biggest fights possible. If Lopez cannot secure a fight against one of those lightweights, the youngest fully unified lightweight champ in boxing’s four-belt era will move up to the junior welterweight division.

“Absolutely. I mean, that’s how it should be,” Lopez replied when asked about pushing for difficult fights. “That’s why this new generation, I mean, you have the likes of Shakur Stevenson, you have the likes of Jaron ‘Boots’ Ennis, you have the likes of so many other guys out there, young fighters. I have a list that I could give off of, that I grew up with in the amateurs. And the fact is this is the new generation. We’re bringing back what the old school was – fight the best and you push on it. I’m not here to pick and choose who I wanna fight, because I wanna defend my title and keep that 0. No. Nah. And now, who knows [how] my figures are gonna go up, if they’re gonna go up after this?

“I mean, that’s the thing. Everyone wants to be like Mayweather. In order to be like Mayweather, you’ve gotta be like ‘Pretty Boy’ first. You’ve gotta fight those guys that they don’t think you’ll win. You’ve gotta fight the likes of those guys that are undefeated and is a good fight, in order to make those type of millions that people wanna make. Why you buying so many chains and all this at an early age? You’re not making nothin’. You’re not making not a dollar, so I’m just thankful that I’m able to be the first one to do that and push for the young ones out there.”

[QUOTE=Roberto Vasquez;20867805]Well Khan would have lost but at the time he deserved the shot. You can pick up half of Floyd's opponents and say they lost to this person or that person and so that means they didn't deserve a…

[QUOTE=Oregonian;20862150]——-/——————- You made it about Khan when you said Floyd ducked him. I know about Khan because I’ve followed his career. You are correct he is a warrior despite losses BUT Gatti was a warrior and is revered by many…

[QUOTE=Roberto Vasquez;20861710]That's quite funny about boxing history. I am not a Khan fan so I don;t remember exactly when he fought who and I don't care enough to look it up. Interesting you knew though. I don't think Khan fights…

[QUOTE=Roberto Vasquez;20859167]I read your link but Floyd made fun of how HE (Floyd) MADE Canelo fight at the lower weight. As for Khan - usualy nonsense. Khan was only stopped by Prescott early in his career at that point and…