The patience of Teofimo Lopez is already wearing thin.

Two months’ worth of downtime in the sport has managed to produce a record amount of social media bravery from boxers willing to take on all comers. The comments are easy to make when there aren’t any fights happening, but the unbeaten lightweight titlist is working on making that a reality.

“We’re trying to make these fights happen,” Lopez (15-0, 12KOs) proclaimed while hosting an Instagram Live session during a midday workout in his makeshift gym at his in-law’s home in Jonesboro, Arkansas. “We’re working. I’m dead ass. I’m being honest, I’ve been working. And the fact that these guys don’t want to fight, that they want something else, that they want a tune-up fight, it’s frustrating. 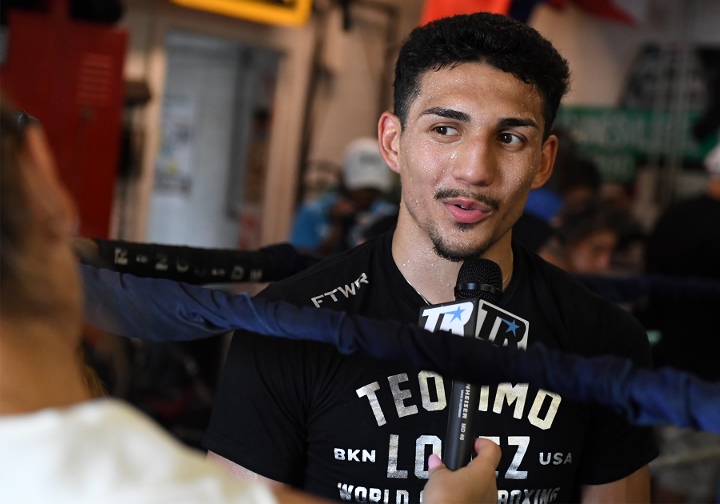 Lopez—who left his Brooklyn home at the start of the coronavirus disease (COVID-19) outbreak in mid-March—has been waiting for his marching orders for a multi-belt lightweight unification clash with unified titlist Vasiliy Lomachenko (14-1, 10KOs). Their bout was due to take place May 30 at Madison Square Garden in New York City, but instead became among the hundreds of fights removed from the schedule from March 14 through present day.

It figures to be a while before boxing in the United States can once again take place with fans in attendance due to social distancing protocol. The short-term solution is to stage smaller shows behind closed doors, although neither that route nor a softer touch very much interests Lopez.

Instead, the 22-year old wants to continue on his mission of cleaning out the lightweight division. It began with his two-round wipeout of Richard Commey to win a lightweight title last December. Next up was to be Lomachenko, who remains at home in Ukraine and likely unable to leave anytime soon due to travel restrictions.

Lopez has now set his sights on U.S.-based lightweight talent, most of whom are unbeaten and around his age. Fighters such as Gervonta Davis (23-0, 22KOs), Devin Haney (24-0, 15KOs) and Ryan Garcia (20-0, 17KOs) have all made the rounds, promising to conquer the world although their competition level has not come close to matching their online bravery.

“Me, my father and my manager are saying if we can’t fight Loma, let’s make the Devin Haney fight happen,” insists Lopez. “We reached out to Eddie Hearns (Matchroom Boxing managing director Eddie Hearn), we haven’t gotten a response back.

“These guys say they want the smoke but they don’t. They’re talking out their ass. Don’t talk about it, be about it. I don’t understand, man. Then you guys back them up for no f—kin’ reason.  [Holds up picture of Haney] A bitch. [Holds up picture of Ryan Garcia] A bitch. They’re all bitches. You’re saying the best like you say you are, prove it. Top Rank already said we’re making fights happen. Don’t back out.”

Not even the adoring social media followers were spared his wrath.

“Y’all loyal fans…. But you’re not even loyal. Y’all f—k with people until they lose,” pointed out Lopez. “I’ll make sure I make them lose. F—k that. One thing about me and my father. We talk a lot of shit because we know we can back it up. We ain’t pu—ies about it.”

Carlos Famoso Hernández is the first Salvadoran world Champ Despite Being born here, Teofimo first Honduran champ despite being born here. Both fighters and countries accept this truth. Why you don’t is beyond me. Also ask hardcore paisa Mexicans and…

[QUOTE=boogbx;20568549]Honestly fam tell Fernando Vargas, Oscar de La Hoya any fighter born here but repping and proud to rep somewhere else like Mexico they ain’t Mexican And see if you don’t get punched into the end of the epidemic.[/QUOTE] You're…

Honestly fam tell Fernando Vargas, Oscar de La Hoya any fighter born here but repping and proud to rep somewhere else like Mexico they ain’t Mexican And see if you don’t get punched into the end of the epidemic.

[QUOTE=boogbx;20568545]All that typing yet he was able to fight in the olympics as a Honduran? Real talk I only read the first few lines and realized you are too Ignorant On this Matter to entertain.[/QUOTE] Haha, you read every word.…

[QUOTE=NachoMan;20568541]Uh, ok, smarter guy. Ask Chino and Canelo about their respective nationalities. See if either of them says they are proud "Americans." Also, ask Floyd Mayweather or Bernard Hopkins if they are "United Statesean." :poke: Secondly, I'm not talking about…