Teofimo Lopez realizes those that don’t consider him an elite lightweight won’t change their minds until he at least beats a world champion.

That’s among the reasons Lopez views his fight against Richard Commey as the most important moment of his career to date. The 22-year-old Lopez (14-0, 11 KOs) will challenge Ghana’s Commey (29-2, 26 KOs) for his IBF 135-pound championship Saturday night at Madison Square Garden in New York.

Commey, 32, is a slight underdog, even though he is the defending champion and has faced a higher level of opposition than Lopez.

“This is it,” Lopez told BoxingScene.com. “I know it’s big. This fight right here changes everything. And I know that.” 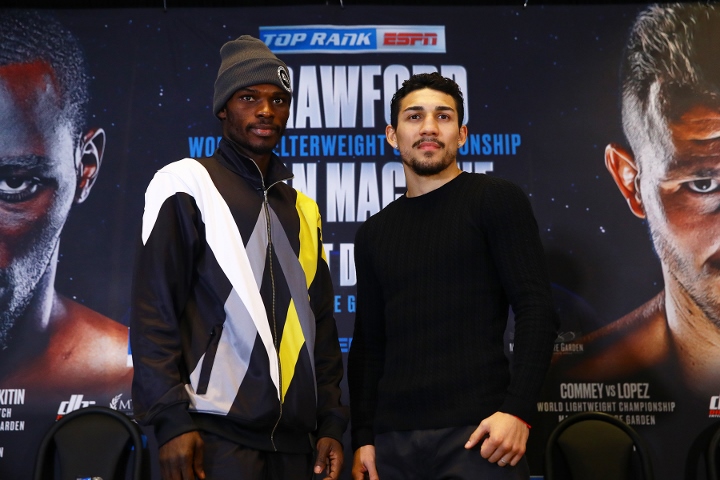 Lopez appropriately prepared for the biggest fight of his three-year career by isolating himself in rural Flemington, New Jersey, near the Pennsylvania border. Commey’s mandatory challenger previously trained in Las Vegas, from which he has relocated to his native Brooklyn.

“I’ve been pushing myself more than I usually do,” Lopez said. “I’m getting in the work I need to get. After sparring, I would usually do my sit-ups and that would be it. I’m doing so much more after sparring. I’m just pushing myself to that limit. I know these are the championship-caliber fights I’m gonna be into. I’m gonna be the first Honduran champion and bring back the belt to all of Central America. So, this is a real big fight, man.

“It’s a huge opportunity for me and what better way to end the year, but on Heisman Trophy night, on ESPN, the best platform out there. I think overall, man, it’s gonna be a hell of a night. After this fight, we’re on to, hopefully, the Lomachenko fight in early 2020. So, you know, we finish [2019] with a bang and we start [2020] off with a boom.”

ESPN will televise Commey-Lopez as part of a tripleheader scheduled to start Saturday at 9 p.m. ET/6 p.m. PT. In the main event, Terence Crawford (35-0, 26 KOs), of Omaha, Nebraska, is set to make a mandatory defense of his WBO welterweight title versus Lithuania’s Egidijus Kavaliauskas (21-0-1, 17 KOs).

Gonna be a good fight

Commey should let his hands go too. Pretty pumped for this fight.

This is the main fight of the card hoelpefully Teo can get that belt and then Loma this coming year.

Hope he went back to basics old school training. Anyways Syle wize, I think Commey is an easy mark for well schooled fighters. Commey just doesn't manage distance very well and those punches are wide enough for a well schooled…