Teofimo Lopez: Being First Champ Of Honduran Descent Means Everything

Teofimo Lopez was twice cheated out of opportunities to represent the heart of a nation.

It’s what made his lightweight title-winning knockout of Richard Commey that much greater of a memory to savor.

The unbeaten Brooklyn native became the first-ever boxer of Honduran descent to claim a major title in the pro ranks with the aforementioned feat. The win came more than three years after being robbed by the judges in the opening round of the 2016 Rio Olympics, where he represented Honduras after being cheated out of a spot on the United States team.

It’s a moment that still remains fresh in his mind and forever one for the time capsule.

“It means everything, honestly,” Lopez (15-0, 12KOs) told Top Rank’s Crystina Poncher during a video interview on the company’s social media channel. “Just for the fact that you bring light into a country that pretty much never seen it. They just come from poverty and everything, a third-world country. It just influences all those people, they get to say they have a champion, a world champion.

“Nicaragua has Chocolatito [four-division and recently reclaimed junior bantamweight titlist Roman Gonzalez], they have Alexis Arguello, the influences go on and on. We have Panama, Roberto Duran. Stuff like that is big.” 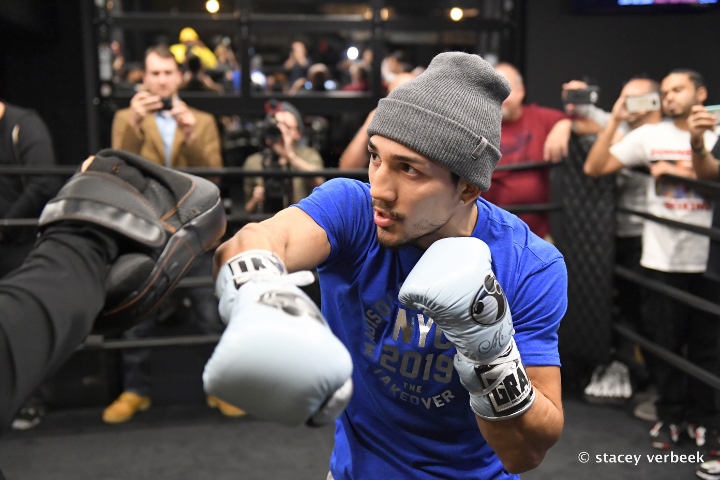 The win itself is hardly the end game for the charismatic 22-year old. The title-claiming effort landed him a jackpot assignment with pound-for-pound entrant and unified lightweight titlist Vasiliy Lomachenko, with their forthcoming superfight awaiting a date as the sport remains on hold due to the ongoing coronavirus disease (COVID-19) pandemic.

For now, it’s just more time to reflect on the crowning achievement of his career. The way he tells it, the best is yet to come especially since the hardest part is over.

“The other part, just that relief,” Lopez said of the burden lifted upon capturing his first major belt. “When they (raise) your hand, all that weight, all that pressure—now it’s stamped into the boxing world.

“But now you gotta go harder.”

Learn fcukin spanish Catracho-wannabe, you won't last long as a champ...you're the weakest champ at 130 Lbs.

all aboard the honduran caravan

[QUOTE=Curtis2;20510891]Porter is considered sparring work level for T Crawford..K Brook would be much more a challenge, much better talent & competition for T Crawford...[/QUOTE] :haha::haha:

[QUOTE=ShoulderRoll;20510267]Is that why Crawford is going to fight Kell Brook instead of Shawn Porter?[/QUOTE] Porter is considered sparring work level for T Crawford..K Brook would be much more a challenge, much better talent & competition for T Crawford...Brook was handling…