Teixeira: I Noticed Adames Was Tired, Knew To Push Him

It was a scenario that could prove unkind to any boxer on a rival promoter’s show. Patrick Teixeira was cut under both eyes and his fight with Carlos Adames threatening to slip away, before turning things around in a flash and ultimately pulling off an upset win in their interim title fight.

A 7th round knockdown paved the way for Brazil’s Teixeira to finish strong in outpointing the previously unbeaten Adames an ESPN+ show presented from The Cosmopolitan in Las Vegas, Nevada by his opponent’s promoter Top Rank Inc. It was near disastrous prior to that point, with the visiting southpaw—who is promoted by Golden Boy Promotions—cut under the left eye in round four, and by round five sliced under both eyes.

“It was very difficult when the cut happens,” Teixeira (31-1, 22KOs) admitted to BoxingScene.com. “But I used my experience to control the fight one round at a time.” 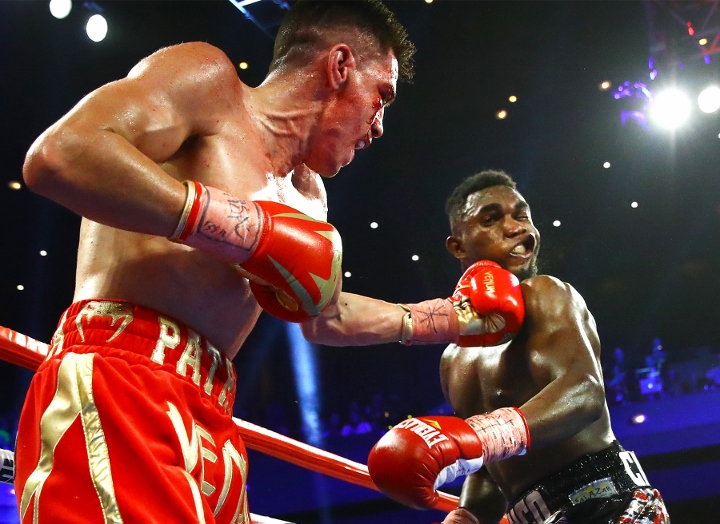 Things appeared to be heading from bad to worse in round seven as Dominican Republic’s Adames (18-1, 14KOs) hitting his stride and seeming to be well on his way to victory. It all changed in a flash, when a right hook by Teixeira badly rocked Adames, with a subsequent sequence sending hm crashing to the canvas.

“He is really a very dedicated, focused athlete who trains hard,” pointed out Patrick Nascimento, Teixeira’s manager who, at the tender age of 24 is one of the youngest guiding minds in the sport today. “He has a great head on his shoulders and is very smart in the ring.”

Adames beat the count but was clearly out on his feet. Referee Robert Byrd stalled long enough for the previously unbeaten contender to make it to the bell, but Teixeira suddenly had a path to victory which he rode all the way to the finish line.

“Before the knockdown, I just noticed that he was getting tired,” stated Teixeira in gaining the confidence to let his hands go while along the ropes. “So I knew to push him. After the knockdown, I thought the referee would stop the fight because he didn't answer the commands.

“I’m glad he didn’t, though. Adames is a great fighter and we were able to give a great show to the fans.”

With the win came an interim version of a junior middleweight title which will likely become a full version once unbeaten Jaime Munguia vacates ahead of his middleweight scrap versus Gary ‘Spike’ O’Sullivan next Janaury in San Antonio, Texas. Whom he next faces isn’t immediately known as Teixeira is still reveling in victory.

Whenever and wherever it takes place, it is less likely to come on a rival promoter’s show.

“I'll talk to Golden Boy Promotions and analyze what our next steps will be,” notes Nascimento. “But we will always be prepared. He is the champion now and we look forward to calling the shots for his next fight.”

If golden boy was smart he’d have Texeira defend his “title” in São Paulo, Rio, Florianopolis, etc attempt to get brasil into boxing fever....I’ve always said that country could be a hot bed for boxing with its poor north and…