Hall of Fame trainer Teddy Atlas believes that a third match between Canelo Alvarez and Gennady Golovkin is well past its expiration date.

A meeting between Golovkin and Alvarez could very likely take place on Mexican Independence Day in September once the boxing schedule resumes with regularly scheduled events after the global pandemic of coronavirus. Atlas, however, insists a trilogy between the two archrivals has already exceeded its shelf life.

DAZN inked both boxers to lucrative deals to pit the pugilists against one another. The 29-year-old Alvarez, though, has flexed his business muscles since signing his $360 million pact with the streaming platform and demanded a better financial framework to his advantage to fight Golovkin once again. In the process, Golovkin, who’ll be 38 next week, has further aged playing the waiting game.

“If you heard a giant sigh of relief somewhere it was coming from [DAZN chairman] John Skipper and the other executives when finally — we think — that third fight is done,” Atlas opined on his talk show "The Fight with Teddy Atlas.”

“Maybe it’s going to save a few people’s jobs over there that they have it if they actually do have this fight hunkered down, and it actually does happen. So that’s the good news. Here’s the bad news. The bad news is it’s too late … Time has passed, people have moved on … I don’t know that interest is there anymore for that fight.” 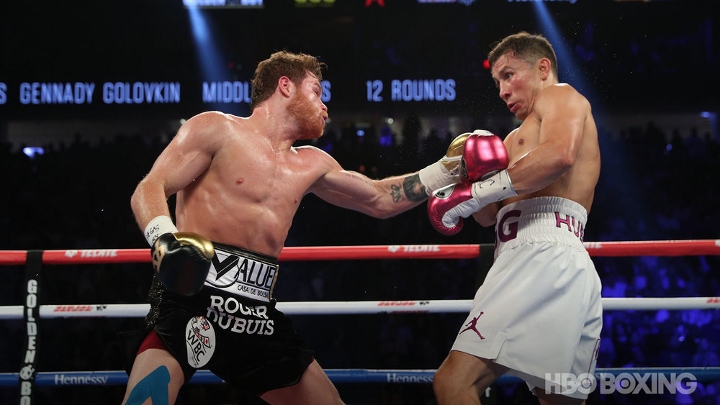 Alvarez and Golovkin’s previous exploits have been well documented. They battled to two highly disputed decisions — one a draw in 2017, the other a majority decision in 2018.

“[Golovkin] showed the heart of the warrior that he is [versus Sergiy Derevyanchenko in October]. He wasn’t right. Was it because he was sick, was it a fluke, was it an anomaly, was it that or was it what [Golovkin] is now? An older fighter, a higher that has left parts of himself in the ring, and parts of himself from the first two Canelo fights.

“I thought those fights [against Canelo] took a lot out of [Golovkin], and I think 400 amateur fights take a lot out of you. And I think when you’re at the age he’s at … What is he now? 38? He’s getting up there toward that number 40.

“I always say you don’t judge a fighter’s age in this tough business chronologically. You judge them by the tough fights they’ve been in.”

Golovkin seemingly aged overnight against Derevyanchenko last year, a hotly contested match and fight of the year candidate that Golovkin narrowly edged via decision while absorbing the most punches he ever had in a fight.

“In the Derevyanchenko fight, [Golovkin] looked like a shot fighter. Yeah, I said it. I said it, you people that want to get your knives out now and your bow and arrows ready. ‘How dare you say that about my guy,” said Atlas. “It’s called Father time, it’s called nature, it’s called aging, and it comes to all of us, but we all don’t have to fight for a living … When the truth comes to you in the ring, the truth can hit you, bang, hard and fast.”

[QUOTE=Doubledagger;20514728]True, but Lara repeatedly stated he had no problem going over to HBO to fight GGG.[/QUOTE] I would have liked to see GGG fight Lara. I don't know what types of conversations took place behind closed doors so I can't…

[QUOTE=emceetns;20512405]I decided to do some quick research about why Golovkin-Lara didn't happen and one reason was network affiliations. GGG was with HBO while Lara was with Showtime and obviously the fight wasn't big enough to work around that issue. I…

[QUOTE=jackblack008;20491402]Canelo is riding a crest wave. He destroyed Kovalev. Why would anyone think he wont do the worse to GGG.[/QUOTE] Depends how much Golovkin has slipped. He has a better chin than Kovalev. Canelo's best punches didn't even wobble Golovkin.…

[QUOTE=ShoulderRoll;20512414]It's too bad Golovkin never did a tune-up with Lara. Incidentally, Canelo Alvarez did fight Erislandy Lara. He didn't make excuses.[/QUOTE] It sounds like you're comparing apples to oranges just because you don't like Golovkin. Yes, Canelo fought Lara in…

[QUOTE=emceetns;20512399]Well to be fair, Vanes was a tune-up and Golovkin only faced him because Canelo failed a drug test before their rematch. Vanes was a late replacement, and it didn't make sense to jeopardize the rematch in September by taking…