Teddy Atlas Details Why Canelo is Heavy Favorite Over Kovalev

Teddy Atlas was known as a commentator who rarely held back when he was animating and berating the airwaves in 21 years at ESPN boxing.

So, it was a bit startling to hear Atlas say that he finally felt liberated, free of any checks and balances, in his new role as a podcast host on “The Fight, with Teddy Atlas.”

Fresh from taping his latest podcast, Atlas demonstrated that apparent newfound freedom, dousing any flicker of hope that Sergey Kovalev has of winning his light heavyweight title defense against Canelo Alvarez on Saturday at the MGM Grand Garden on DAZN.

That size advantage that Kovalev enjoys? Won’t be a factor.

His vaunted power? His experience at the weight? His meanness? No, no, no, according to Atlas.

If Atlas were an attorney, it would be an open-and-shut case, the facts are so clear to the longtime trainer, who said he will be in Bristol, Connecticut on Saturday to help with ESPN’s coverage of the fight. He seemed to be sharpening his talking points when he spoke to BoxingScene this week on the matchup. Or is it a mismatch? By the way, Atlas is not alone. Many others believe Canelo will have his way on Saturday.

Among his main contentions:

Atlas thinks Kovalev might already be thinking of retirement with a “pretty good pension” from the lucrative payday he will receive from his fight with Canelo.

Atlas compared Kovalev to an “older car” and said Canelo has the tools to stop Kovalev late, calling Canelo the stronger fighter, even though he’s rising two weight divisions to face him.

Atlas also took time to comment on the unfortunate perception that when it comes to winning a decision against Canelo in Las Vegas, that may not be the best strategy for an opposing fighter to have.

And if Canelo wins? Atlas doesn’t believe he has any future at 175 pounds beyond Kovalev.

“He’s shown some erosion as a fighter, I think there’s no doubt about it, if you’re going to be honest about it, he has shown some deterioration and he probably has one foot on the other side of his career, and he might have half a foot on the side of retirement, too,” Atlas said of Kovalev, speaking to BoxingScene in a phone interview. “That’s a pretty damn good pension,” he said of Kovalev’s payday. “So, that happens to fighters.”

Atlas is not alone in his assessment of the fight. Despite Kovalev’s impressive achievements, there aren’t too many observers who think he will win.

This, even though Canelo is rising two weight classes from 160 to 175, is surrendering four inches in height, two inches in reach and has never fought as a light heavyweight.

But the advantage of youth – Canelo is seven years younger — and his upward trajectory as a fighter — Canelo has shown new wrinkles of late, suggesting he’s on the upswing while Kovalev has sometimes struggled, suffering two knockout losses in 2017 and 2018 —  tells the story for most for how this encounter will play out.

It’s a little confusing, to be honest - the assumption that Canelo will whisk past Kovalev in his light heavyweight debut, but that’s the prevailing feeling that most have.

If the fight does go the distance, there’s absolutely no chance that Kovalev will win a decision in Las Vegas, he said.

“I’d like to find somebody who would buy the idea that Kovalev has a snowball’s chance in hell to get a decision when (Canelo is) the face of boxing, the biggest name in boxing, he’s the cash cow of the promoter, and he and the network gave him $360 million dollars, so please, show me a sucker and maybe I do have a bridge for him,” Atlas said. “Show me a sucker who really believes, in this sport, if you’re going to be honest about it, the way this sport works, that Kovalev has a chance to walk out of that building with a decision. I’d like to know who that guy is?” 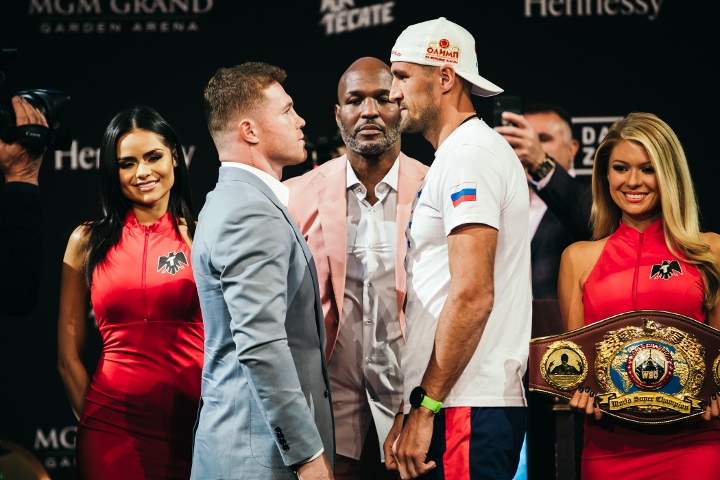 Atlas suggested that Kovalev might still not be fully recovered from his last bout on Aug. 24 when he stopped Anthony Yarde in eleven rounds but took punishment to the point where his trainer, Buddy McGirt, even threatened to stop the fight after the eighth. That's when Atlas basically compared Kovalev to an old jalopy.

“I think taking the fight on such short notice, a couple months since his last fight, that’s kind of like having an older car, you have an older car and you go on a tough trip, you don’t go on a second tough trip right away. You put it in the shop, get an oil change, and you keep it in the garage for a little while,” Atlas said. “To me, I look at fighters the same way, coming back this fast, an older guy, coming off a tough fight, took a lot of punches late in that fight, came very close to losing it all, to being gone, and now he’s coming back quick with a younger guy, an experienced guy, a guy who can be pretty physical even though he’s the smaller guy, it could bode well for Canelo and not so well for Kovalev.”

And because Yarde even hurt Kovalev in the eventful eighth round, Atlas could see Canelo not just hurting Kovalev but finishing the job.

And what of the size difference? Can’t we at least count on Kovalev to impose his physicality on Canelo? Not in Atlas’ estimation.

And if anyone thinks Kovalev will win, then, judging by Atlas’ line of reasoning, it will be a pretty big upset.

[QUOTE=fernandtg;20165316]Sure thing, you're welcome. Agenda for who? I don't know anything about that site, heard about them on Friday night.[/QUOTE] Postscript. I see that this site will not let me post the URL to the 24x7 site, but you can…

[QUOTE=fernandtg;20165316]Sure thing, you're welcome. Agenda for who? I don't know anything about that site, heard about them on Friday night.[/QUOTE] 24x7 writers are mostly small bitter people who only write negative things and shed no light on boxing at all.…

[QUOTE=Verus;20163979]Boxing 24x7 is completely agenda-driven and unreliable, but Dan Rafael is a real journalist and tries to get his facts right. Thanks. I appreciate the response.[/QUOTE] Sure thing, you're welcome. Agenda for who? I don't know anything about that site,…

[QUOTE=fernandtg;20160056]Boxing247 and Fat Dan reported it.[/QUOTE] Boxing 24x7 is completely agenda-driven and unreliable, but Dan Rafael is a real journalist and tries to get his facts right. Thanks. I appreciate the response.

Canelo is a heavy favorite because most knowledgeable betters know oscar isn't going to let his cash cow take a loss.