Team Pacquiao: The Amir Khan Fight Is News To Us

Amir Khan’s claim that his next fight will come versus Manny Pacquiao managed to catch many in the industry off guard—including Pacquiao himself.

The former 140-pound titlist, fresh off of a knockout win over massively undersized Billy Dib last Friday in Saudi Arabia, claimed that he will be returning to the region for his next ring adventure. A November date has been offered, along with the insistence that a deal is tentatively in place for a showdown with the legendary Filipino southpaw.

“The next fight is going to be back in Saudi Arabia, it is going to be in Riyadh this time and it is going to be on November 8,” Khan stated Tuesday during a press conference in his hometown of Bolton, England. “Hopefully it could be the Manny Pacquiao fight, we have both signed and the fight is done and hopefully he gets past his fight on the weekend then we go and do that fight.

“If not there will be other back-up plans but we wish Manny Pacquiao all the very best for this weekend’s fight.” 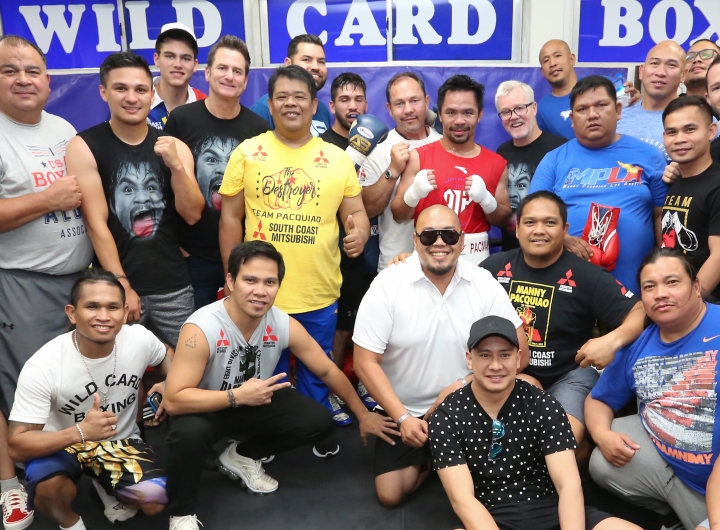 Pacquiao’s own fight with Keith Thurman (29-0, 22KOs)—which airs live on Fox Sports Pay-Per-View this Saturday live from MGM Grand in Las Vegas—is all that is presently on his mind. The only thoughts he has of Khan are to advise him to seek out those very back-up plans he said are in place.

“It’s simple, Senator Pacquiao is focused on his fight July 20 on Fox Sports Pay-Per-View versus Keith Thurman,” Sean Gibbons, president of MP Promotions told BoxingScene.com in response to the outlandish claims. “The Amir Khan fight is news to us."

Pacquiao (61-7-2, 39KOs) and Khan trained alongside one another during their years spent under the tutelage of Hall of Fame trainer Freddie Roach. Khan (34-5, 21KOs) rose to prominence as a unified titlist in the 140-pound division during such time, but whose reign ended in back-to-back losses to Lamont Peterson and Danny Garcia.

The 2004 Olympic Silver medalist has since worked with Virgil Hunter, beginning with a Dec. 2012 win over Carlos Molina. The two have been together ever since, save for a brief stint working with Joe Goossen while Hunter battled health issues.

Khan remains a recognizable name but has been unable to return to the sport’s top level. He is 8-2 over his last 10 fights, the two losses coming versus Saul ‘Canelo’ Alvarez in an ill-advised 155-pound catchweight bout for the World middleweight title and a 6th round stoppage versus unbeaten pound-for-pound entrant and reigning welterweight titlist Terence Crawford this past April.

Following his win over Dib—a former featherweight titlist who moved up three divisions from 130 pounds on very short notice as a late replacement—Khan was taken aback by the atmosphere to where he’d love nothing more than to return as soon as possible. Of course, floating a name like Pacquiao is an easy way to arouse such interest.

“I still think, even if [Pacquiao] loses [to Thurman], it is a very big fight in the Middle East, there has been so much talk about it for many years,” believes Khan.

The feeling isn’t quite mutual.

“The Senator is completely unaware of any fight with Amir Khan and has never signed any contract for the fight,” confirms Gibbons. “[Pacquiao] wants to tell all his fans please support him on July 20 FOX PPV vs Keith Thurman.”

Lol...Already the little weasel is back tracking ....only just realising he's the only one in that sad little world he lives in. He's now saying he was told it was a done deal and not of course by who.He must…

A Mere Con living down to his reputation.....

I can't stand this guy.... He reminds me of one of those wrestlers from back in the day nobody liked or cared about but always cut 10min promos.

[QUOTE=RGJTMMRDCMJRJSM;19905438]They take care of their own. I doubt they're willing to put up money for what Pac deserves. They'll definitely try to short-change Manny.[/QUOTE] I don't think so. Pacqiao is a massive global name. And he won't fight there unless…