The latest training camp for Sergey Lipinets has varied considerably from the others, yet still feels a lot like the last one.

The verbal jab references how the last fight turned out for the former 140-pound titlist, rallying to drop and stop former two-division title claimant Lamont Peterson in the 10th round of their Fight of the Year contender this past March in the greater Washington D.C. area. The night ended with Peterson abruptly announcing his retirement in front of his adoring local fans, while Lipinets (15-1, 11KOs) emerged as a welterweight threat. 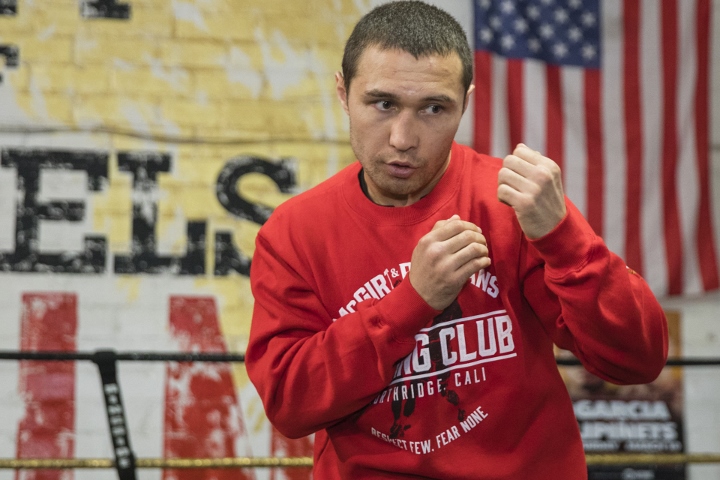 Little time was wasted in returning to the gym, allowing some bumps and bruises to heal before getting back at it with renowned trainer Joe Goossen. The two first hooked up for the aforementioned fight versus Peterson, after having spent the bulk of his young career with former two-division champ and recent Hall of Fame-enshrined James ‘Buddy’ McGirt.

This will now mark their second full camp together in preparation for his upcoming showdown versus Molina Jr. (30-8, 24KOs, a former Goossen client.

At the time he returned to the gym, the California-based Kazakhstani had no clue when his next fight would take place or against whom. The plan was to return in early September, but he naturally jumped at the chance to face Molina Jr. on the Fox Sports Pay-Per-View undercard topped by unbeaten Keith Thurman’s welterweight title defense versus legendary former eight-division title claimant Manny Pacquiao.

Three of the four main bouts on the PPV telecast will showcase the welterweight division, as also included is a title eliminator between Yordenis Ugas and unbeaten former lightweight titlist Omar Figueroa, Jr. It’s the perfect platform for Lipinets, who has every intention of becoming a two-division titlist within his next 2-3 fights.

“There's no slowing down in my march to get that welterweight championship belt,” insists Lipinets, whose 140-pound title reign ended with a competitive but clear points loss to then-unbeaten Mikey Garcia last March. “title shot is right around the corner. I'm very excited to be part of a show like this and I'm grateful for these opportunities in my career and I promise that I'll earn my keep.

Until then, he’s looking forward to send another divisional rival packing.

“We’ve got several different sparring partners, including middleweights for this camp,” Vaysfeld notes. “Sergey and (Goossen) clicked from the very beginning. You saw what happened the last time he was in the ring.

“Now with four months of these two working together, you’re going to see an even better Sergey Lipinets. And the fight will end the same way the last one did—the last time you’ll ever see his opponent fight again.”

I wouldn't be surprised if Molina ends up beating him. Helluva fight this one.

Prides himself in going to war with washed up fighters.

[QUOTE=BIGPOPPAPUMP;19882909]The latest training camp for Sergey Lipinets has varied considerably from the others, yet still feels a lot like the last one. "We're training for another retirement party," Alex Vaysfeld, Lipinets' manager quipped to BoxingScene.com of preparation for his boxer's…

Lipinets-peterson was one of the better fights this year. Lipinets made me a fan, looking forward to it!!

I wish Lipinets was fighting Josesito Lopez! Molina is a warrior, but I think Lipinets gets him outta there in 8! I need more Eimanatas Stanioinis on PBC! Ronnie Shields, Let's Go! [B]FREE JARON "BOOTS" ENNIS!!![/B]