DOMINIC INGLE has accused Josh Warrington of beating Carl Frampton and Lee Selby when the pair were on the slide.

Warrington (28-0, 6KOs) took the IBF featherweight title from Selby in a huge upset 12 months ago and surprised Frampton in December in his first defence. 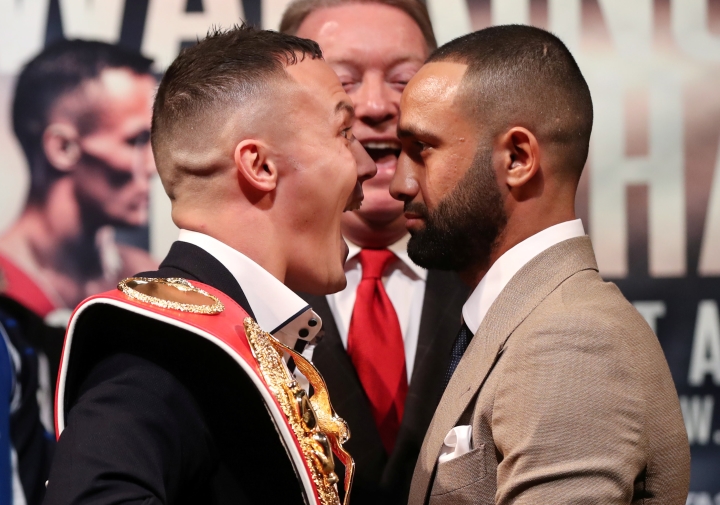 Warrington is the favourite to retain his crown in his backyard, but Ingle insists that the champion will be shocked by his Sheffield rival.

Ingle said: “Warrington has had success with Frampton and Selby by jumping on them full steam ahead and they have been unable to keep him off.

“Maybe that is down to Selby and Frampton being past the sell-by date.

“I think Galahad has got more ambition than Selby and Frampton. Those results complimented Warrington.

“What he has with Galahad is a kid who is unbeaten, fresh, and fought himself into the mandatory position by going over to Boston and beating Toka Kahn Clary.

“Josh beat up a washed up Dennis Ceylan in his final eliminator, we went into someone’s back yard and won it.

“Galahad is very controlled and precise. The accuracy will keep Warrington off. He can’t keep walking into those type of shots and that is basically what Warrington is going to do.

“He is going to box the same way he has always had success at and hope for the best.

“But, for once he is getting someone who is fitter than him, fresher than him who can box and slow that pace down.”

Josh Warrington tops the bill at First Direct Arena, Leeds when he defends his IBF featherweight championship against Kid Galahad on Saturday June 15.

[QUOTE=rudy;19766580]He only looked impressive when he was on the gear since his comeback he hardly looks the beast since returning.[/QUOTE] Having followed his career, he seems like someone that raises and lowers himself to the competition, which is why I…

Interesting to see how good kid is without peds. Nel o isn't too bad off them.

[QUOTE=deathofaclown;19764917]Galahad fights nothing like Naz. He is a switch hitter but relies far more on fundamentals than Naz. Not saying he’s on the level of Naz obviously. Their style is nothing alike. Don’t write off Kid Galahad in this one.…

[QUOTE=rudy;19764619]So what excuse when he beats Galhad. He just reminds me of a poor Naseem Hamed without real power. He wont beat Warrington who has improved i never rated him until he beat Selby. That night he would beat Leo…

Interested to see what Ingle think they have over Warrington. He made Selby looked finished and then made Frampton (whod recently easily beat Donaire) look even more finished than Selby. Galahad beat Clary by demoralising him by treading on his…