Eddie Hearn is not only prepared to move on from a potential blockbuster showdown between Katie Taylor and Amanda Serrano, but now seeks to collect back the money he’s already invested into such a clash.

The high-powered promoter has come to the realization that chances are highly unlikely of Serrano (38-1-1, 28KOs) going through with a proposed August 22 fight date with Ireland’s Taylor (15-0, 6KOs) on the property of Hearn’s Matchroom Boxing headquarters in Brentwood, Essex, England. As such, notification has been sent to Serrano and her team to collect a $10,000 advance for training expenses.

New of his request was delivered to Brooklyn’s Serrano and her immediate team on Wednesday through her promoter, Lou DiBella. Naturally, it didn’t go over very well.

“Yesterday (Wednesday) we were notified by our promoter Lou DiBella that Eddie Hearn wants that 10k back by tomorrow Friday (July 3rd) at 5pm,” explained Jordan Maldonado, manager and head trainer of the record-setting seven-division titlist. “He seems not to care we trained not only from March till May but also for his rescheduled date of July 4th—another date where he canceled without an accurate explanation.” 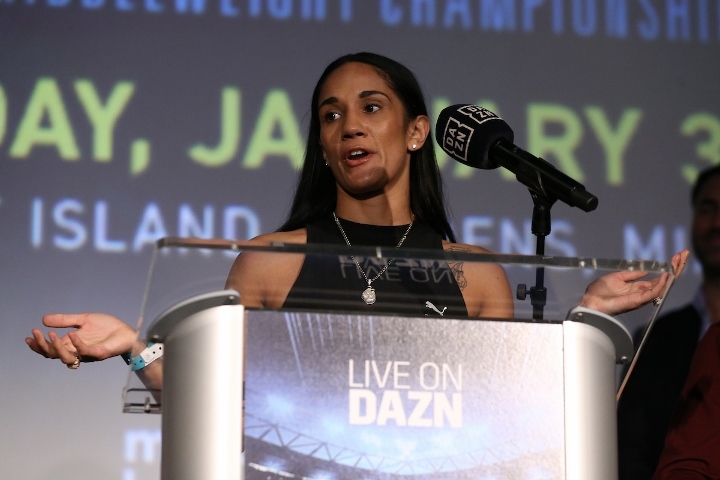 The superfight between female pound-for-pound entrants was originally targeted for May 2 at Manchester Arena in Manchester, England. All parties were on board for the event until it was shut down due to the ongoing coronavirus pandemic. Hearn attempted to salvage the event—which is headlined by a heavyweight clash between England’s Dillian Whyte and Russia’s Alexander Povetkin—in rescheduling the show in its entirety for July 4 at the same venue.

As such, both boxers remained hard at work. Serrano sought any open space in any of the five boroughs in New York City—where gyms have remained closed ever since mid-March—while Taylor set up shop in Connecticut.

“In March, we received $10,000 to be used for training expenses for the Taylor fight, which was previously scheduled for May 2nd,” Maldonado acknowledged. “With that money we hired a new trainer to help us in the technical aspects, hired sparring partners so we knew we wouldn’t miss out on any sessions.

“We also hired a nutritionist to make sure we maintained the weight up while training hard because 135 lbs isn’t Amanda's natural weight [Serrano has won titles in seven weight divisions, but with the 126-pound featherweight division serving as her physical peak]. While training hard she goes way under. Our new assistant trainer Gary Stark Sr. is out of Staten Island and those trips require $19 daily tolls.”

For reasons already reported by BoxingScene.com, the July 4 date also fell by the wayside with the announcement from Matchroom Boxing of the event being canceled in terms of still taking place at Manchester Arena. The inability to stage shows in front of fans during the ongoing coronavirus pandemic eliminates the use of such venues.

From there came a plan by Hearn to stage a summer series in the backyard of his company headquarters. Four shows were announced running every Saturday from August 1 through the August 22 show to have included Whyte-Povetkin and Taylor-Serrano.

“Now because we didn’t [accept] his offer after the July cancellation of taking a purse deduction and a change of venue to literally fight in his backyard at one of his homes, he’s being disrespectful and vindictive,” insists Maldanado.

The fight began to fall apart once word made its way to Serrano through her promoter of a requested paycut, with as much also being asked of Taylor. A statement from Serrano’s publicist indicated that she was moving on from the fight, at which point Hearn alerted DiBella that the request was off the table and that she would be paid in full.

It was also learned that Serrano was prepared to serve as one of the contestants on Exatlón, a popular competition-style reality show on Telemundo which is headquartered in Miami, Florida. In a last-ditch effort to salvage the Taylor fight, Hearn submitted a cease and desist letter to the network, insisting that Serrano should not be permitted to appear on the show while still under contract for the oft-rescheduled title fight.

“I’ve lost two lucrative opportunities to fight in an MMA match and another to participate in the Exatlón competition waiting for Katie Taylor,” notes Serrano, who has won titles in every weight division from junior bantamweight (115-pounds) through junior welterweight (140 pounds). “The first dates were postponed because of issues on their side, not ours, and now I’m to blame? Signing with Matchroom Boxing has been stagnant to my career because I debuted with them in January 2019, made history, and I didn’t fight again until September. We just ask for respect and transparency.

“Their organizers say that the fight [with Taylor] will be the biggest in women’s boxing, but their actions show the opposite. He sent a cease and desist letter to Telemundo which were to air the show Exatlón stopping me from competing and making money and turns around to ask for a refund of spent money I used to train for canceled fight dates.”

Serrano has fought three times under her current contract with DAZN-USA and Hearn. The last such appearance came in the form of a short-notice fight on a Hearn-promoted show in Miami this past January. The placement came about after an opportunity fell through to appear on a Combates Americas mixed martial arts card, with the understanding that the next fight would be the proposed showdown with Taylor.

The fight now appears to be all but dead on arrival, with Taylor—who has been out of the ring since a 10-round win over Christina Linardatou to win a 140-pound title last November—to remain on the August 22 show against an opponent to be determined.

There remains a glimmer of hope it can still be Serrano, although next steps have been taken.

“Subject to them coming on this week and saying “Fair is fair, we’ll take the fight.”—there’s still time,” Hearn explained in a recent interview on IFL TV.

Absent that, it’s onto the next one.

Taylor and Belgium’s Persoon collided in a four-belt lightweight championship unification clash last June in New York City. The nip-and-tuck affair saw Taylor sprint out to an early lead before being forced to fend off a late surge by Persoon to take a 10-round majority decision, becoming the undisputed lightweight queen in the process.

The decision was met with mixed reviews, a storyline that would undoubtedly carry throughout the proposed rematch.

“It’s a much bigger fight because of the controversy from the first fight,” notes Hearn. “Katie wants to take that fight because there is doubt in some people’s mind that she won that fight. So now, it’s a fight like all these fights in the world that deserves sold-out crowds in an arena. But we don’t live in that world anymore. If you’re a fighter, if you care about legacy and achievement, you have to adapt to this environment. You have to go for it.

“[Taylor] wants Persoon, she wants Serrano, she wants Braekhus, she wants Cyborg. I’m not saying she’s done after that, but that’s what motivates her. When you look at the world, the only thing I can guarantee Katie Taylor if we can get Persoon over the line is, we can do it now. Can we do it in October or November? I don’t know. But I know we’ve got a slot in August. I think she’ll be up for it.”

It’s clear that Serrano is no longer up for anything Matchroom-related.

“I’ve read from many that Mr. Hearn was a horrible person,” states Serrano. “Now I know first-hand he’s actually worse than that. I’m a firm believer in God and know he doesn’t like ugly.

“To my Island and my fans, I love you and promise just like our island is resilient “So Am I!” We will be back.”

[QUOTE=Cool Scant;20642346]I know brits always assume they’re the smartest in the room but The fight was originally scheduled for Madison Square Garden now it’s Scheduled for Matchroom Square Garden last time I checked that’s a different continent.[/QUOTE] If your going…

[QUOTE=REDEEMER;20642434]This is another lie . Hearn proposed a pay cut which he was doing to other fighters due to no live gate ,it didn’t breach any contract which was existing already . Taylor took the cut so there was no…

[QUOTE=REDEEMER;20642441]You said Serrano has nothing to do with postponements when fights are subject to them as though she can walk out on them ,particularly in the situation we have now ? Ha Your threads and responses most of the time…

[QUOTE=KTFOKING;20641326]No, I understand everything fine. It seems it is YOU not understanding. Serrano had spent that 10k already for the first two training camps she had of fights that got postponed. She only THEN looked to join a reality show…

[QUOTE=ShoulderRoll;20642278]Does the contract say that Hearn can change the terms and ask Serrano to take a pay cut? Because he tried to do just that. So it seems this contract is something that everyone has to adhere to only when…