Their fight wasn’t a sanctioned eliminator, but Maciej Sulecki certainly treated his middleweight clash versus Gabriel Rosado as an audition for a title shot.

He nearly blew it—and a huge lead—but rode out a late knockdown and disastrous close to take a 10 round unanimous decision in Rosado’s hometown in taking a Friday evening at Liacouras Center in Philadelphia.

Scores were 95-91 (twice) and 95-93 in favor of Sulecki, who twice dropped Rosado but was down himself in round nine. 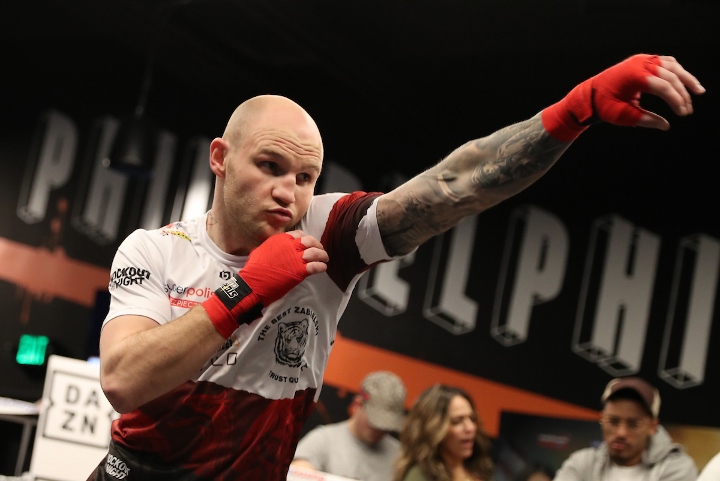 Rosado is generally all gas, no brakes whenever he enters the ring but it was Sulecki who pressed the action and forced a furious pace from the opening bell. The middleweight contender from Poland scored a flash knockdown midway through the opening round, flooring Rosado with a straight right hand to jump out to an early lead.

The fighting Philly heart of Rosado was on full display, as is the case every time he fights, but was unable to seize control at any point in the fight. Sulecki worked behind a steady jab to set up his straight right hand shots, subtly sliding back and working a modified shoulder roll any time Rosado attempted to go on the attack.

Momentum briefly shifted at the start of the second half, but only in the sense that Rosado was landing right hand shots with a big more regularity. It only prompted Sulecki to offer a modest shift in his defensive strategy, widening the distance between the two any time Rosado went on the attack.

A clean right hand provided Rosado with a glimmer of hope in round seven, but was a singular moment in an otherwise convincing round for Sulecki, who outlanded his foe 119-88 over the course of the contest.

Perhaps none of those shots were bigger than the counter left hook, right hand combination Sulecki landed to floor Rosado late in round eight. It needed to be big because it was his last great moment in the fight.

In the town that produced Hollywood’s most storied boxing franchise, Rosado had his own Rocky moment in round nine. Well down on the cards, the hometown hero rallied to floor Sulecki with a right hand shot late in round nine.

Sulecki struggled to rise to his feet, his current state sensed by Rosado who jumped on his wounded prey. A flurry of power punches once again sent the Polish middleweight to the canvas, once again beating the count and making it out of the round.

Rosado (24-12-1, 14KOs) went all in for the 10th and final round, but just didn’t have enough to close the show—even if he thought it was enough to pull out the victory.

“I thought by the middle rounds I turned It around,” Rosado told DAZN’s Chris Mannix afterward. “I began to counter well and apply pressure. I had the knockdown in round nine and though I closed it in round 10.”

Instead, it’s a hard-fought loss for Rosado in his first fight back in Philadelphia in more than seven years.

While he readily admits flirting with disaster, he also didn’t mince words in the fight he most wants next.

“I was stupid, I didn’t listen to my trainer’s instructions,” Sulecki confessed. “I lost concentration, but I recovered. I want Demetrius Andrade next.”

Andrade is due to return to the ring either June 15 or June 22, with Matchroom Boxing hoping to bring the fight to his hometown of Providence, Rhode Island. Such a fight will mark Sulecki's third fight in his opponent's hometown in the span of four fights.

[QUOTE=Boxing Logic;19586243]Rosado IMO in his prime was the first to beat Peter Quillin (just got robbed they wanted Quillin to win), past his prime he still almost beat Sulecki and dropped it more than Jacobs did, and past his prime…

This fight is perfect example of why these "docter"comentaters need to shut the he ll up.Its EVERY fight now with them calling out refs/corner to stop fight(Kellerman the worst)you can only make boxing so safe without RUINING it.If Kellermen REALLY…

Am I the only one who saw Rosado throw like 6 punches to the back of the head, then hitting an opponent who was already down?

I should be proud of Sulecki. I am not. Dropped twice by a not good boxer.

[QUOTE=Boxfan83;19586322]Rosado should get into Bare Knuckle boxing. He could make some decent cash fighting former UFC & Belletor fighters.[/QUOTE]