SugarHill Steward: Credit For Fury Beating Wilder Should Be Even

SugarHill Steward describes his immediate emotions in celebration after Tyson Fury defeated Deontay Wilder as a mixed one.

As soon as Wilder trainer Mark Breland threw in the towel in the seventh round, Fury lifted both of his arms in celebration, just as Steward climbed the apron. They both embraced in a genuine hug, and then Fury planted a wet one on Steward.

“I’ve never had a man kiss me before. It was rough,” Steward quipped to BoxingScene.com as he reflected on the fight over the phone. “Besides all that, it was a great feeling. I had a plan for him and he trusted my plan. He executed the plan and we got the results that we were looking for in a sensational victory. It wasn’t the knockout in the second round like he wanted, but he got the knockout.” 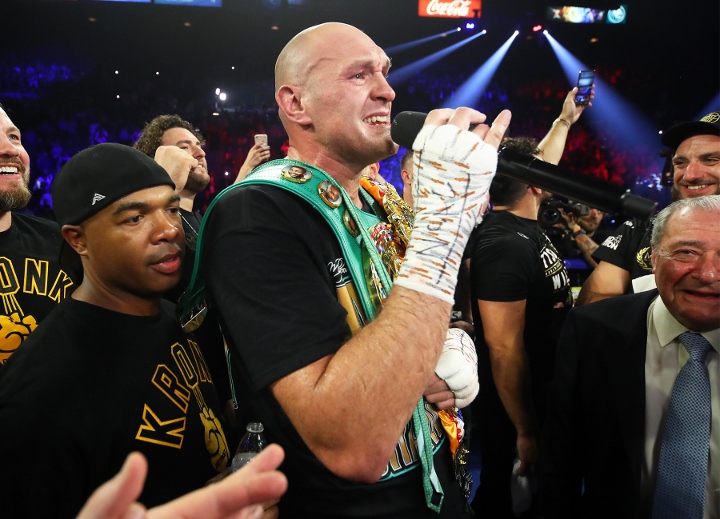 Steward said that when he first shared his vision with the newly crowned WBC heavyweight champion Fury (30-0-1, 21 KOs) when they renewed a union in December, he insisted that the British boxer would knock out Wilder (42-1-1, 41 KOs).

“People said it was a master plan, but none of that isn’t possible if the fighter doesn't listen to the coach and execute it,” said Steward. “Regardless of any plan I put together, the fighter has to follow it for it to be even talked about in such a manner like this. The fighter has to believe and follow that plan through. It’s a team effort. The credit should be even. That’s what I was hired for. To put that plan together — to get Tyson the win he wanted. He wanted something different, and that’s what he got.

“He had an excellent training camp, despite all of the things that were being said about him. All of the hard work and his dedication to the sport paid off. He wanted it. I wanted it too, just as much as he wanted it for himself.”

Steward said he coached like he had a chip on his shoulder just as much as the slight underdog Fury trained and fought, too.

“Just because [former Fury trainer] Ben Davison was out and I was in, it didn’t change anything. That’s my Kronk Gym attitude and I take it into every fight,” said Steward. “Emanuel Steward is smiling down from heaven. He knew Tyson Fury would become a champion way back then”

[quote=get em up;20429755]you wont see me disagreeing with that. Wilder needs a whole makeover as far as team goes[/quote] guys like hurd and wilder who i am a fan of should have changed their corner before taking losses.... Fury was…

Sht stirring article. He didnt ask for credit. All boxingscene headlines are like that. They take one short (2-3 questions) interview, chop it up into 20 misqoute headlines, release them weeks apart. Person in question starts to seem "obsessed", "jealous",…

[QUOTE=DeeMoney;20429264]Fury won't really get a lot of credit for the win. The one thing I've learned about boxing fans is that in their eyes there is the top guy in a division- and EVERYONE ELSE is a bum. 1 month…

[QUOTE=brick wall;20429709]he was just talking about the credit for the fight plan...he's trying to say that no matter how great the plan is it still has to be executed by the fighter to work so credit should be even between…

Sugarhill did what Freddie Roach was saying he should do, same as John Fury. First fight Roach wanted to push Wilder when he was hurt, Benny wanted Tyson to stick and move.