The two boxers collided back in May of 2015, with Mayweather walking away with a twelve round unanimous decision.

The bout, which took several years to finalize, became the most financially lucrative contest in the history of the sport. 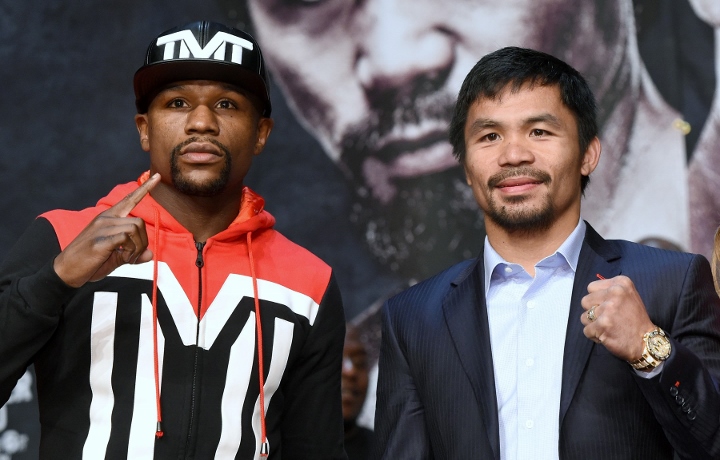 Mayweather, 42-years-old, retired back in August of 2017, when he stopped UFC superstar Conor McGregor in ten rounds at the T-Mobile Arena in Las Vegas.

Pacquiao, 40-years-old, has continued to fight on. Last month, he showed glimpses of his prime when he dropped and decisioned undefeated Keith Thurman to capture the WBA welterweight title at Las Vegas' MGM Grand.

Pacquiao has continued to call for a rematch with Mayweather. He claims to have entered the first bout with pre-existing shoulder injury, which sustained further injury during the fourth round. Whether or not the shoulder affected his performance is up for debate, but he underwent surgery a few days after the fight.

Mayweather's last ring appearance was a New Year's Eve exhibition bout in Japan, where he demolished featherweight kickboxing star Tenshin Nasukawa in the first round.

Leonard would like to see a second fight take place. He expects the rematch to sell - and he also expects most of the critics to watch the fight.

"Put it this way, it should be done. People will watch it," Leonard told TMZ.

"It's two guys in their 40s. When I was 40, I came back, I don't know who it was against, but you had a different stage in your life, spiritually, physically, mentally. He (Pacquiao) looked phenomenal (in his last fight)."

[QUOTE=P4P Forever;20037458]You in love with Floyd so we know what you like. Say that to my face, you know Id knock your teeth out.[/QUOTE] ——— Mr Scrotum is also a keyboard warrior. You know hiding behind a computer in your…

[QUOTE=P4P Forever;20036309]Who said anything about Floyd ducking Pac for a rematch? Who's is saying that. You. Your making that up. So what are you saying ? You act like I'm a big Pac fan. Yet its you who's literally in…

[QUOTE=Oregonian;20036271]————————- Floyd wanting to fight Khabib is business and that crossover fans plus MMA fans. He already beat PAC. And will feat him again if they fight. What is amusing is PAC fans get so upset that Floyd has no…

[QUOTE=Curtis Harper;20035623]If you take out May and JMM, Pac has been very careful with who he fights. No power guys, past it guys and a guy who had 1 fight in 2 years. Why would he change that tactic now…