Stevenson Warns Loma To Stay at 135, Could See Lopez Bout in Future

Rising star Shakur Stevenson has a short-term goal of winning a junior lightweight world title next spring, a longer-term goal of unifying belts after that and then, a few years down the road, he can envision a huge welterweight showdown with pal Teofimo Lopez, the newly crowned unified lightweight world champion.

“I’ll be back in January and then I’m fighting the winner (of Jamel Herring-Carl Frampton) in March and my next fight after that should be the winner of Berchelt and Valdez,” Stevenson told BoxingScene.

Stevenson, the 2016 U.S. Olympic silver medalist, won a vacant featherweight world title by one-sided rout of Joet Gonzalez last October but never defended it because a March defense against Miguel Marriaga was canceled due to the coronavirus pandemic. Stevenson then moved up to junior lightweight and knocked out Felix Caraballo in the sixth round as Top Rank, his promoter, brought boxing back to the ESPN airwaves in June. 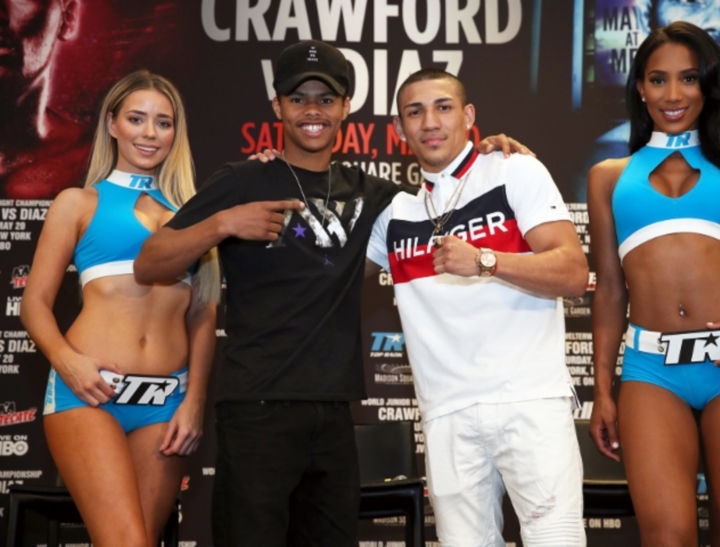 Stevenson is the mandatory challenger for the winner of the fight between WBO 130-pound titlist Herring (22-2, 10 KOs) and former two-division titleholder Frampton (28-2, 16 KOs). Top Rank chairman Bob Arum told BoxingScene that fight is supposed to take place Dec. 19 in the United Kingdom.

“The winner of that fight has to fight Shakur in 120 days and in the interim Shakur will fight in January,” Arum said, noting that there is no opponent yet for Stevenson’s early 2021 bout.

That means Stevenson is due to challenge the Herring-Frampton winner next spring, Arum said.

If he wins, Stevenson said he believes Top Rank will immediately match him in a unification bout with the winner of the fight between WBC junior lightweight titlist Miguel Berchelt (38-1-0, 34 KOs) and former featherweight titlist Oscar Valdez (28-0, 22 KOs), who are due to meet on Dec. 12.

“I know for a fact that’s what’s going to happen – that I’ll end up fighting Berchelt after I get the WBO title,” Stevenson said. “I think Berchelt is the bigger, stronger guy and a really smart fighter but I don’t see his size even mattering in a fight with me. I don’t see Berchelt’s skills being that good. I think he has power and is kind of strong but I don’t see that fight being a hard fight for me. I think same thing with Valdez. He isn’t on my level either. Valdez is a good fighter but I think I’m on a whole different level.”

Stevenson said he believes Berchelt will be willing to fight him if he beats Valdez.

“I think it’s already in his plans,” Stevenson said. “He tweeted me when he knew I was going up to 130. I think it’s in his brain that he wants to fight me.”

As for who would face first, Herring or Frampton, Stevenson was noncommittal.

“I think that’s a real competitive fight. Both guys are kind of older and I think the fight could go either way,” he said, adding that he would prefer to fight “the U.K. guy” Frampton.

“It’s a new era. Look at Teofimo,” Stevenson continued. “There are a lot of eyes on the new era, the younger generation, like me and everybody else coming up. After I get that WBO strap I’ll be two-division world champ at 23 years old. And then unifying it? I think that would be something different. A lot of people don’t want to get in the ring with me so I got to just keep fighting and become a big superstar to where they don’t care no more and just get in the ring for the big payday.”

Stevenson said he is highly motivated to face the best opponents willing to fight him just like Lopez (16-0, 12 KOs) did against Vasiliy Lomachenko in his unanimous decision win to unify lightweight world titles on Saturday night in at the conference center of the MGM Grand in Las Vegas.

“We’re the new generation. I feed off his energy, he feeds off my energy,” Stevenson said of Lopez. “Teo will send me texts every now and then and we’ll talk boxing and then we’ll say we need to pick up the phone more often and talk to each other. It’s all love. Saturday I feel like he motivated me a lot seeing him get in the ring with Lomachenko, who nobody wanted to fight. Teo fought him and he didn’t back down, not at one point in the fight. You got to respect Teo. He motivated me last weekend and now I want to do something major and I want to keep getting better and better.”

And down the road in a few years, Stevenson said he can certainly envision both of them having moved up multiple weight classes for an eventual big welterweight fight with each other despite their friendship.

“Definitely, if we end up in the same weight class,” Stevenson said. “Right now it’s not like we’re in the same weight class. He’s looking more to move up to 140 and I just got to 130. So, it’s not like we’re really on the same course but maybe one day we will be a big fight like (Oscar)  De La Hoya and Floyd (Mayweather). Top Rank built those guys. Top Rank builds really good fighters, so I feel like me and Teofimo are the future of the company.”

Stevenson then made sure to make one other thing clear about his future.

“Another thing, and put this in the report,” Stevenson said. “Make sure to tell Lomachenko don’t come back down to 130 or the same thing will happen that happened with Teo. I promise you. It wouldn’t be wise of him.”

It's a great fight. I hope it happens.

Shakur shut up !!!!! You should be in jail you punk. Why dont you go and try to hit some defense-less individual on the ground or try to hit another woman. You are a disgrace !!!

Loma should go straight for the winner of Berchelt vs. Valdez, that is if his shoulder is healthy? Lol!

Loma will go out like most of the greats getting his ass kicked by a young lion(Stevenson).