There was some concern before Shakur Stevenson stepped on the scale Friday afternoon that the undefeated featherweight contender might not make weight for his fight Saturday night.

Their 10-round fight will headline an ESPN broadcast Saturday night from Prudential Center in Newark, New Jersey, Stevenson’s hometown. 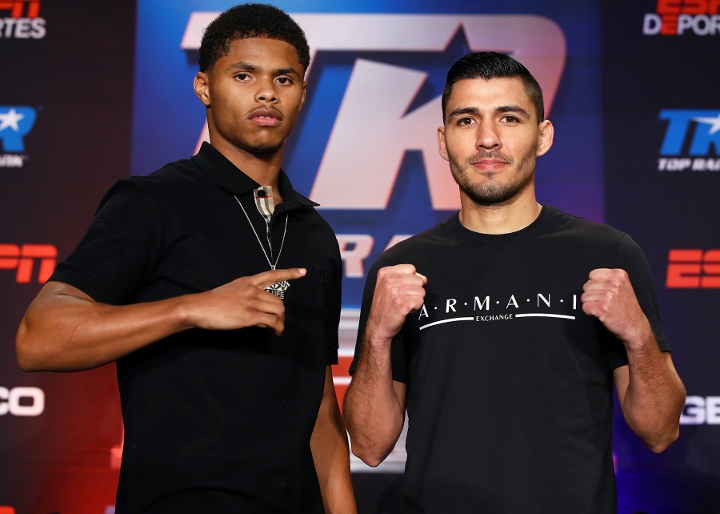 The 28-year-old Guevara (27-4, 12 KOs), of El Cajon, California, is the third opponent for Stevenson since his homecoming officially was announced at a press conference a month ago in Newark.

“I feel like a lot of people watched my last two fights, and they see I’ve been getting stronger and developing power,” Stevenson told BoxingScene.com. “Guys is not ready to get in the ring with that. They see that my last performance [against Christopher Diaz], I looked good. I can out-box you, make you look bad. I can do everything, so they don’t really wanna get in the ring with me.”

The 22-year-old Stevenson, a 2016 Olympic silver medalist, is the mandatory challenger for WBO featherweight champion Oscar Valdez (). Assuming the heavily favored Stevenson wins Saturday night, he hopes his next fight is a shot at Mexico’s Valdez or the next highest-ranked contender if Valdez opts to give up his title and move up to 130 pounds.

Greer, who’s ranked No. 4 by the IBF, officially weighed 117¼ pounds Friday, same as the 11th-ranked Potapov.

Below are the weights for the six other fights on Saturday’s card, which will start streaming on ESPN+ at 7 p.m. ET/4 p.m. PT:

[QUOTE=mcdonalds;19896111]Valdez will probably duck and move up[/QUOTE] That's the smart move. Nobody wants to see him get shut out over 12 then blame the weight for his performance.

[QUOTE=Mister Wolf;19896050]Hopefully the WBO forces Valdez to fight him after this.[/QUOTE] Valdez will probably duck and move up

Hopefully the WBO forces Valdez to fight him after this.