Stevenson: I'll Punish Socarras For My Last Loss To A Cuban

For now, Stevenson plans to make Hairon Socarras pay July 13 for his split-decision defeat to Ramirez in the 123-pound gold-medal match at the 2016 Summer Olympics. Like Ramirez, Socarras is Cuban.

Stevenson (11-0, 6 KOs) and Socarras (22-0-3, 14 KOs) will square off in a 10-round main event ESPN will televise next month from Prudential Center in Stevenson’s hometown of Newark. 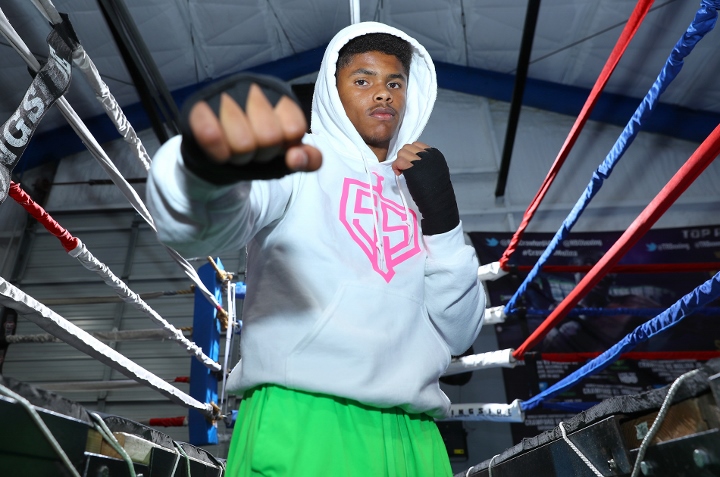 “I don’t even know dude name,” Stevenson said during a press conference Monday at The Hilton Newark Penn Station. “Hammerin’ whatever – he gotta go. He gotta go. The last Cuban I fought, he beat me, so man, he gotta get punished for the last Cuban. July 13th, I’m ready to show out.”

Stevenson is off to a strong start to a professional career that began after Ramirez edged him in August 2016 in Rio de Janeiro. In his last fight, the 21-year-old southpaw scored a relatively easy, 10-round, unanimous-decision win over Christopher Diaz (24-2, 16 KOs) on April 20 at Madison Square Garden.

Miami’s Socarras, 26, is unbeaten, but Stevenson should emerge as the toughest opponent of his career. Socarras, who didn’t attend the press conference, has been matched modestly since he turned pro in February 2011.

“I’ve seen film on him,” Stevenson told BoxingScene.com following the press conference. “I don’t know his name. He’s not bad, though. He thinks in there. He picks his punches good. I think he’s gonna play my game and I don’t think he’s gonna win at my game. We’re gonna see.”

A rematch with Ramirez is in the back of Stevenson’s mind, especially since the company that promotes him, Bob Arum’s Top Rank Inc., recently signed Ramirez. The 25-year-old Ramirez, a two-time Olympic gold medalist, is expected to make his pro debut sometime this summer.

“Sooner or later, me and Robeisy are gonna have to get that back,” Stevenson said. “I’m gonna wait until he gets his chance, because I’m probably gonna be a world champion before he even gets to that point.”

Fight cancelled, Socarras pull out because doesn't to be tested for peds.

That's why he punched dude in the garage cause he was Cuban. Racist mofo

...I like Stevenson, but he's been talking a lot outside of the ring...I'll go for Ramirez any day, but he better not look past this cuban....never know...

[QUOTE=fourtheboys96;19826481]Stevenson will be at least a division higher then Robeisy when the time comes. Even during the Olympics (and in many youtube clips), Robeisy always looked like the smaller fighter. I think he can start at 118lbs for this pro…

[QUOTE=chico malo ali;19826378]stevenson is good and will beat socarras with ease! But Ramirez is the real deal and would beat socarras and stevenson in the same night![/QUOTE] I think Robeisy’s future, as with all young fighters, remains to be seen.…