That is Shakur Stevenson’s blunt evaluation of Lomachenko’s performance in the first half of his 12-round, unanimous-decision loss to Teofimo Lopez on October 17 in Las Vegas. Stevenson questioned Lomachenko’s heart in an interview with BoxingScene.com and warned the three-division champion that moving back down to 130 pounds to fight him would “be a really bad mistake.”

Stevenson sensed fear in Lomachenko as soon as the bell sounded to start his 135-pound title unification fight against the unbeaten, hard-hitting Lopez.

“I think that if me and Lomachenko fight, I think that’d be an easy fight,” Stevenson told BoxingScene.com. “I think, with all due respect, I watched that fight with Teofimo, and I don’t respect the way that he fought. And I don’t think that a man with not a lot of heart could come in the ring and do anything with me. That’s just my opinion. I feel like heart was the problem in that fight. I don’t think it was Lomachenko’s size or his skills, as everybody’s saying. I think that heart was his biggest problem, and allowing somebody to tell you how strong they is, or you see somebody and say, ‘OK, he strong,’ and you’re fearful of the fact that man got power, and you’re going[KI1]  in the ring and you don’t throw no punches for six rounds straight.

Stevenson would welcome a fight against Lomachenko sometime in 2021. The 2016 Olympic silver medalist assumes Lomachenko would fight him, especially if Stevenson wins a junior lightweight world title next year, because Lomachenko doesn’t consider him as dangerous as Lopez. 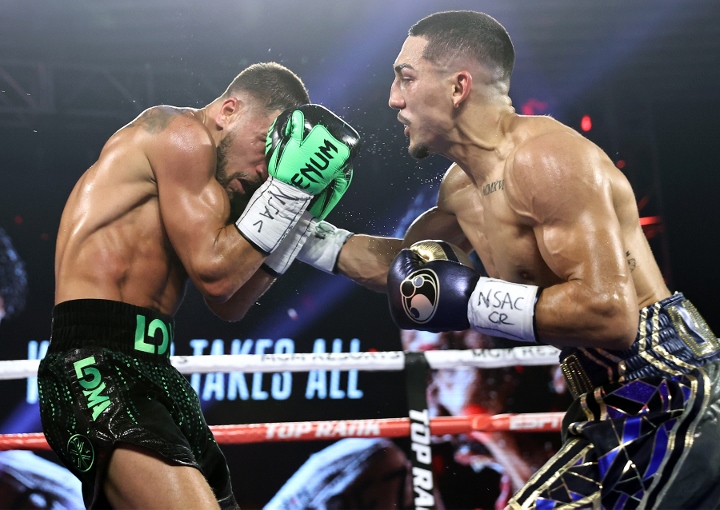 The Newark, New Jersey, native feels his professional development and familiarity with Lomachenko would enable him to produce what would be the biggest victory of his pro career. Stevenson and Lomachenko have sparred against each other five times, but not in the three years since Lomachenko was preparing to square off against Guillermo Rigondeaux in December 2017.

“I know certain stuff about Lomachenko,” Stevenson said. “I’ve been in there with him before. It’s not like it’s somebody I didn’t see before. I’ve been in there, went 12 rounds with him several times. I think I’m just real familiar with him, and I know that the last time he seen me, I think that I wasn’t as developed as I am now. Like, I wasn’t as strong, I wasn’t as sharp, I wasn’t as smart in the pros as I am now. I’m a pro. I’m a professional fighter. But back then, I was kinda like a little amateurish, coming off the amateurs, still got a lot of stuff that’s amateur. But now it’s like I’m a full-fledged pro, like I know what to do in there now. So, I think he would agree to fight me, but I think it would be the biggest mistake he could make.”

Stevenson couldn’t believe the strategic mistake Lomachenko made when he opposed Lopez. Approaching Lopez so cautiously in the first six rounds clearly cost the two-time Olympic gold medalist in a fight he lost by big margins on all three scorecards (119-109, 117-111, 116-112).

“I looked at it like the first six rounds,” Stevenson said, “especially like if you listen to the interviews, when Lomachenko was talking, he said, ‘I have to be very careful every second of the way in this fight.’ Like, he had to watch out for the power every second of the way. And it sound like, even if you watch the Lopez-Richard Commey [fight], right after the fight he looked so shocked, like, ‘Wow! What just happened?’ But his face was kinda like he was shocked. I don’t know – I didn’t see the game face. Before the fight with Lomachenko, of course, I was thinking like, ‘OK, it’s gonna be Lomachenko putting it on a different level.’

“But as the fight went on, I seen that it seemed like he was scared. All that stuff kinda played back to my head, like, oh, snap! He did say, ‘Wow! What was that?’ He was shocked about [Lopez]. Like, ‘Lucky punch,’ instead of being a real person and giving Teofimo his credit. He kind of just called it a lucky punch and played it that kinda way. So, I kinda recognized that he was kinda scared when he got in that ring.”

Stevenson sensed Lomachenko accepted the Lopez bout because he felt as if he had no alternative, even though he was wary of Lopez’s power.

“I think that he was real concerned about the power,” Stevenson said. “I think that taking the fight, though, in his heart he felt like that was the right thing to do, making that fight happen, because Teofimo was constantly calling his name out. I think he just had no choice. He had no choice, like this dude done called your name non-stop, says your name in every interview he do. So, I think he got to the point where he was like, ‘Man, I don’t got no choice.’

“But I think when he got in that ring – I know he was a little like skeptical about the power – but when he got in the ring and he felt like the misses on Teofimo’s punches, I think he kinda like backed down. Like he didn’t say, ‘OK, I need to step up and I’m gonna be great tonight. This is what I gotta do.’ It seemed like he just backed down, like, ‘OK, we just gonna wait until the steam get off his punches, then try to do something.’ But that sh-t was a horrible game plan.”