NEW YORK – If you push promotional and network affiliations aside, Gary Russell Jr.-Shakur Stevenson obviously is one of the most appealing fights that can be made within the featherweight division.

Neither fighter really has talked seriously about that 126-pound title unification fight happening, though.

The 31-year-old Russell (31-1, 18 KOs), who owns the WBC featherweight crown, is most interested in finally fighting Leo Santa Cruz. Boxing’s longest-reigning champion also would welcome a showdown with Gervonta Davis, even if it meant moving up two weight classes to get that fight. 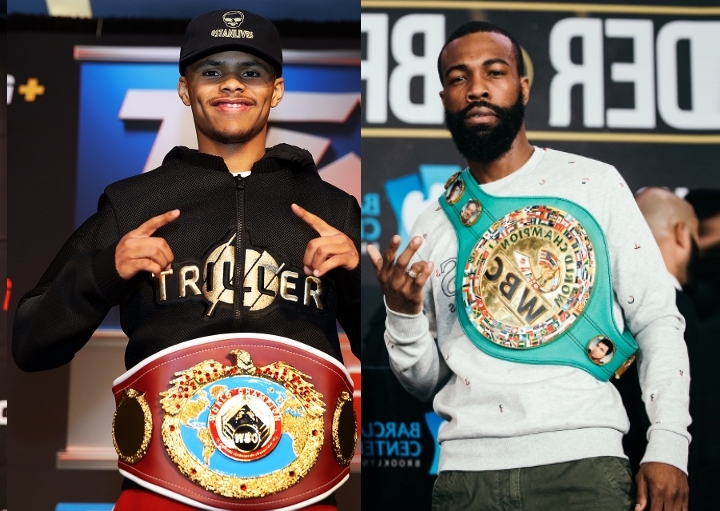 Davis (23-0, 22 KOs) and Santa Cruz (37-1-1, 19 KOs) seem headed for a pay-per-view fight of their own whenever the boxing business resumes, which at least would leave Russell available for a fascinating fight versus Stevenson later this year. The 22-year-old Stevenson told BoxingScene.com recently that he would fight Russell, whom Stevenson admits he has admired during his rise through the amateur and professional ranks.

Stevenson (13-0, 7 KOs), the WBO featherweight champion, doesn’t feel Russell is ducking him, despite that Russell isn’t talking about boxing him.

“Gary ain’t no punk,” Stevenson said. “He ain’t one of them fighters that’ll duck people. Gary know me a lot. We didn’t come up together. I came up under him, but I’ve been in his gym. I spar his brother all the time. Me and him have been in the same gym. Right after my world title fight, me and him was going back and forth, playing around with each other, talking about me and him fighting each other. I think he’s got a lot of respect for me, and I’ve got a lot of respect for him. But if that’s the fight that the fans want, I think we’ll do it. I’ll fight anybody – I’ll say that.”

Had Stevenson beaten Colombia’s Miguel Marriaga (29-3, 25 KOs) in his first title defense March 14 at Madison Square Garden’s Hulu Theater, a deal for his fight with Warrington might’ve been made for them to square off sometime this summer. The Stevenson-Marriaga card was postponed due to the COVID-19 pandemic, which will delay countless fights, including Stevenson-Warrington.

Regardless, Russell-Stevenson doesn’t appear to be a potential fight that’ll be impacted by this pandemic.

“We’ve got a friendship going,” Stevenson said. “He’s kind of like a big brother to me, so I don’t think he’s ducking me. I just think he’s not thinking about me and him as a fight that actually could happen.”

[QUOTE=KillaMane26;204817 One thing we have to be very appreciative is the hearts of these young guys! They have no problem calling anyone out and seem to be ready to fight anyone! [/QUOTE] Saying they'll fight anyone and actually doing it…

No shakur but you are a PUNK, mad soft..

[QUOTE=MulaKO;20482389]He didn’t outbox anything That was hard fought victory The scores don’t line up with the fight[/QUOTE] totally with you

[QUOTE=megh50;20482101]I beg to disagree, that was not a comfortable victory for Russel vs Tugstsogt Nyambayar. It was hard-fought, even though the scores appear wide[/QUOTE] He didn’t outbox anything That was hard fought victory The scores don’t line up with the…