Gary "Spike" O’Sullivan has been promised another world title shot.

The Cork man was withdrawn in the 11th-round earlier this month when he faced Jaime Munguia.

Munguia stepped up to middleweight at the Alamodome in San Antonio, Texas after relinquishing the WBO world title at super-welterweight. 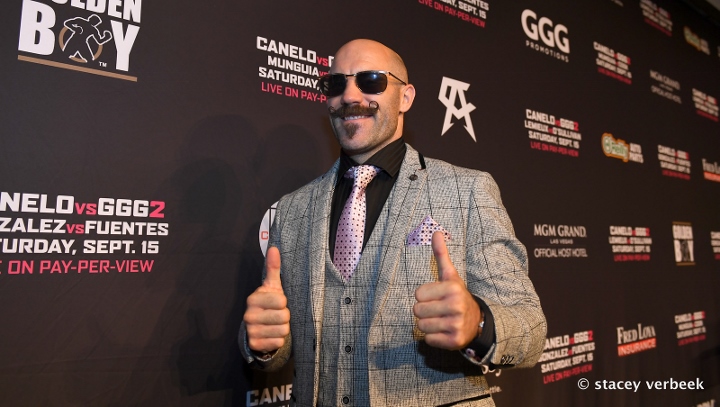 Less than four months after his final defence of that title against Patrick Allotey in Carson, California, the 23-year-old Mexican took out ‘Spike’ in the penultimate round, despite being deducted a point for low blows in round six.

And after a more than credible showing, it has been revealed that Golden Boy Promotions has promised O’Sullivan another crack at global honours, this time down in the 154-pound division.

“Golden Boy said they are going to get me a world title shot at light-middleweight,” said O’Sullivan, who works closely with Oscar De La Hoya and co. as well as Murphy’s Boxing, when speaking to the Irish Mirror. “I think he was stronger at 160lbs than he was at 154lbs. He was the bigger guy in there, but I nearly took him out a few times as well.

“I rocked him a few times.”

Patrick Teixeira, the reigning WBO champion at super-welterweight who was upgraded from interim titlist after Munguia vacated his crown, recently inked a promotional pact with Golden Boy and a fight with O’Sullivan seems like it will be very easy to make.

Liverpudlian Liam Smith, the former WBO title holder who was beaten by Munguia in July 2018 at the Hard Rock Hotel and Casino in Las Vegas, is keen on a clash with Teixeira, but still holds a burning desire for that return against Munguia.

It could well be a battle between O’Sullivan and ‘Beefy’ to see who lands the more lucrative opportunity.

Further details regarding the next fights of the pair will be revealed in due course.

The power of the mustache

How can they promise that?

The current state of boxing nowaday... Pathetic. This is part of the reason you see some guys get brutal bad beatings in the sport, you throw them in undeserving against the elite simply because you're not willing to put those…