T-Mobile Arena, Las Vegas - David Lemieux (40-4, 34KOs) of Montreal, Canada defeated Gary O'Sullivan (28-3, 22KOs) of Cork, Ireland via knockout in the first round of a middleweight bout scheduled for 12 rounds. Lemieux earned a chance at the WBA Middleweight Title by stopping O'Sullivan at 2:44 seconds of the aforementioned round.

"Unfortunately, this is boxing," said Gary O'Sullivan. "I got caught, and it just so happens it was against a 179-pound light heavyweight who caught me. That was a big weight discrepancy at fight time." 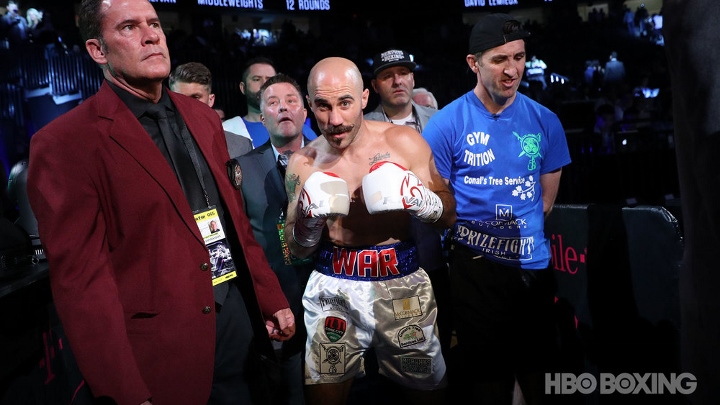 "Even though I won tonight, I'm very disappointed because I wasn't allowed the opportunity to demonstrate my fighting," said Jaba Khositashvili. "My opponent kept holding me and wouldn't let me fight him. All I want to do is fight. I have over 20 years of experience fighting and half of that has been spent in the amateurs."

Brian Ceballo (5-0, 3KOs) of New York, New York won via TKO against David Thomas (6-3-2, 2KOs) of Orange, Texas in the second round of a welterweight fight originally scheduled for six rounds.

"I figured out beforehand that he always fights the exact same way," said Brian Ceballo. "So, I knew to keep my distance and keep a fast pace. I saw he couldn't counter, so I kept the pressure and now I'm 5-0. I'm 24 years old, and now I'm ready for a tougher opponent."

I think he would have knocked him out even without the extra weight. You don't trade with Lemieux. Also, what a sore loser after the fight when Lemieux tried to embrace him and Gary was all stand-offish and cold.

[QUOTE=KidDinamita;19121665]And IMHO, Spike isn't a World Class fighter as well, so he will struggle against punchers big or similar like Lemieux. Even what he did to Stevens[/QUOTE] Right. I’m more concerned with top level guys fighting guys well beneath them.…

[QUOTE=Blond Beast;19121326]I remember the Gatti v Gamache fight. Im cdn and we love Gatti here. I played football against people as a teenager that were so much older and outweighed sum people on the filed by hundred pounds. I understand…

Spike got knocked off his vintage bicycle and woke up in another dimension after that KO.

[QUOTE=KidDinamita;19118294]They should also take into consideration when a fighter gains a lot of weight from the previous day. If a fighter cant make weight in a healthy way then he isn't meant for that weight class. An example of Gatti…