Spence's Coach: We Have a Game Plan To Knock Porter Out

Derrick James, the head trainer for IBF welterweight champion  Errol "The Truth" Spence, explained that he put together a game plan to score a knockout victory over Shawn Porter next Saturday night at Staples Center in Los Angeles.

Porter will stake his WBC welterweight crown in a high stakes unification, which is being carried by Fox Sports Pay-Per-View.

The two boxers are very friendly and have known each other for a long time. But since the contest was announced, the tension has certainly grown and bother boxers have been taking verbal swipes at each other.

"Both fighters are very familiar with each other and that should make this a really exciting fight for boxing fans. Shawn and Errol are both going to have to make adjustments on the fly and whoever executes better is going to be victorious," James said. 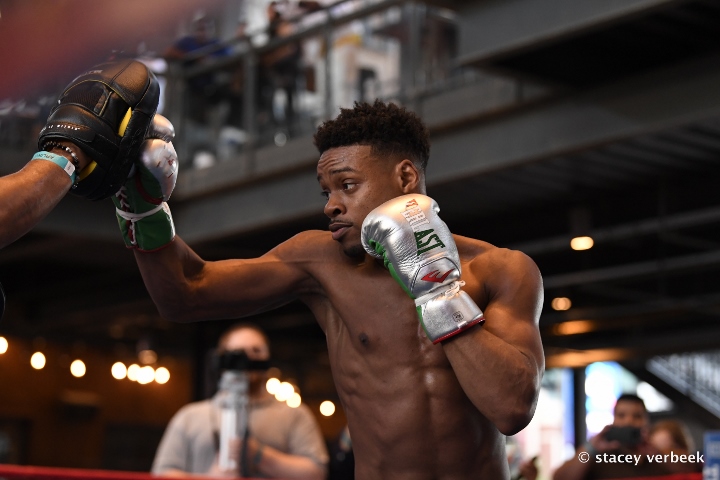 In his last fight back in March, Spence scored a one-sided twelve round unanimous decision over four division champion Mikey Garcia.

But the victory drew some criticism, because Garcia was moving up by two weight divisions and the much bigger Spence was unable to put him away.

This time around, Spence is very focused to make a statement by stopping Porter inside the distance. Porter's two career defeats came by decision.

"Errol is ready to go 12 rounds if he needs, but we know that we have a game plan to get this knockout. It's definitely something that Errol is looking for to make the statement that he wants," James said.

"I know that Errol is focused only on what he has in front of him. He knows the style that Shawn brings into the ring and because of it, you have to be mentally there 100 percent. Or he can wear you down. I don't expect Errol to have any trouble with any aggressive tactics from Shawn."

[QUOTE=El_Mero;20085949]Actually I'm among the majority that saw an uneven fight that last way too long. U like chess? Yeah ok kid. You need classes[/QUOTE] Nah u're among the minority....go and beat Oscar up for not knocking Floyd out.... Even Robert…

[QUOTE=Mateuz asato;20085672]Kid....why did Mickey think he say something Floyd was smaller vs Camelot and Oscar but he still did his thing I don't watch boxing for knockouts...I love a good chess match if there's a knockout it's just a plus.…

[QUOTE=El_Mero;20084854]Vs a small guy, no it's not. It's called wack af. Mikey couldnt hurt him, let alone touch him. That's the difference, boy. Stick to your gay music, son.[/QUOTE] Kid....why did Mickey think he saw something Floyd was smaller vs…

[QUOTE=Mateuz asato;20084815]Lol.... there's a world outside your head, and in that world not everyone considered it boring also in that world most analyst's thought Spence display was a masterpiece.....it doesn't mater if they used the exact words Boxing is about…

[QUOTE=El_Mero;20082741]I know it was a nice one, kid. Because the fact that you are the only one to call that boring fight, that shouldve been a ko or at the least a stoppage by spence, a masterpiece when nobody, boxing…