Spence's Trainer: Brook Would Be Best Opponent Crawford Has Ever Fought

Terence Crawford wanted some answers from the former IBF welterweight champion at MGM Grand in Las Vegas the week of the Tyson Fury-Deontay Wilder rematch.

“We’re talking and, all of a sudden, Terence Crawford walks up,” James recalled during a recent interview with BoxingScene.com. “ And they start talking about fighting. Terence was like, ‘Do you think you can make the weight?’ I think they’re trying to fight at 147.” 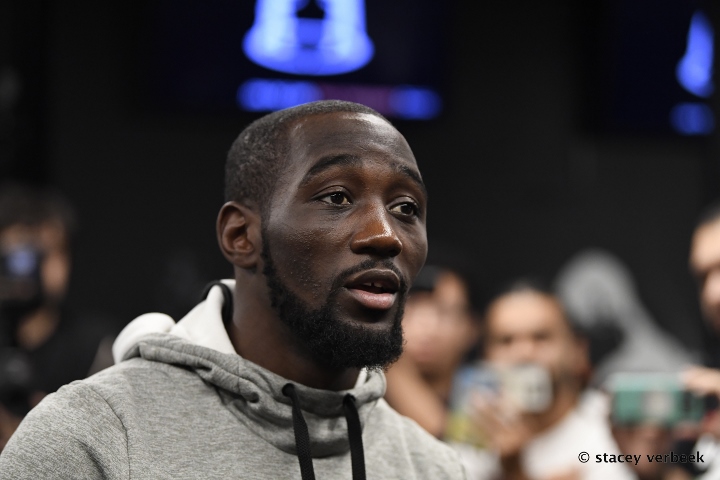 If Crawford boxes Brook next, they would fight for Crawford’s WBO welterweight title. England’s Brook (39-2, 27 KOs) hasn’t competed at the welterweight division’s 147-pound limit since Spence knocked him out in the 11th round of their May 2017 fight for Brook’s IBF belt at Bramall Lane in Sheffield, England, Brook’s hometown.

Each of Brook’s three fights since Spence beat him were contested at the junior middleweight limit of 154 pounds. Brook insists, though, that he can make 147 pounds for the type of opportunity a fight with Crawford would present.

Bob Arum, Crawford’s promoter, has had preliminary conversations with Brook’s representatives regarding him challenging Crawford once the COVID-19 pandemic ends. Arum’s company, Top Rank Inc., also is considering other opponents for Crawford’s next bout, but Brook is toward the top of its list.

Crawford was supposed to return to the ring June 13, but his next bout was pushed back indefinitely due to the coronavirus crisis. If Brook faces Crawford next, James would consider the 34-year-old ex-champion the best opponent of Crawford’s career.

“With that being said, it could possibly be more competitive than people think. But it just depends on Terence’s Crawford’s ability, strategy and what he does. I know he’s a great athlete, a great fighter, so I’m thinking he should get him. But I’m going for Team USA, anyway.”

The 32-year-old Crawford, though an unbeaten three-division champion, has been criticized for fighting a lower level of opposition than fellow welterweight champions Manny Pacquiao (WBA) and Spence (IBF, WBC). Crawford (36-0, 27 KOs), of Omaha, Nebraska, has recorded technical-knockout victories over Jeff Horn, Jose Benavidez Jr., Amir Khan and Egidijus Kavaliauskas in his four fights since the onetime undisputed 140-pound champion moved up to the welterweight division two years ago to challenge Horn.

The 30-year-old Spence (26-0, 21 KOs), a strong southpaw from DeSoto, Texas, is the welterweight most boxing fans want Crawford to fight. A Spence-Crawford fight is not expected to happen next, however, for various reasons.

[QUOTE=Gary Coleman;20552392]All of this seems very familiar. Arum and Crawford have floated ideas about fighting Brook, Porter and Pacquiao but will, no doubt, settle for some fringe contender no one has ever heard of and claim everyone is ducking. Ugas…

[QUOTE=Curtis2;20550925]Terrance KO's Lamont today or 5,6,7,8 years ago...Lamont did get robbed of victory vs cherry picker Danny G...[/QUOTE] Lamont kind of did get robbed but he played himself switching style mid fight or so

All of this seems very familiar. Arum and Crawford have floated ideas about fighting Brook, Porter and Pacquiao but will, no doubt, settle for some fringe contender no one has ever heard of and claim everyone is ducking. Ugas has…

[QUOTE=Uncle Sugar;20551378]Just Stop!...We all know alot of these PBC Fighters was Avoiding Crawford in the Welterweight Division....All those that had Belts wouldn't fight Crawford until they lost Their Belts to their Stablemates....keeping the Belts over on the PBC Side.... Crawford…