LOS ANGELES – Shawn Porter didn’t have to cut off any of his hair to make weight this time.

The WBC welterweight champion made weight on his first try Friday for his 147-pound title unification fight against Errol Spence Jr. Porter weighed exactly 147 pounds when he got on the California State Athletic Commission’s scale at the Intercontinental Los Angeles Downtown hotel. 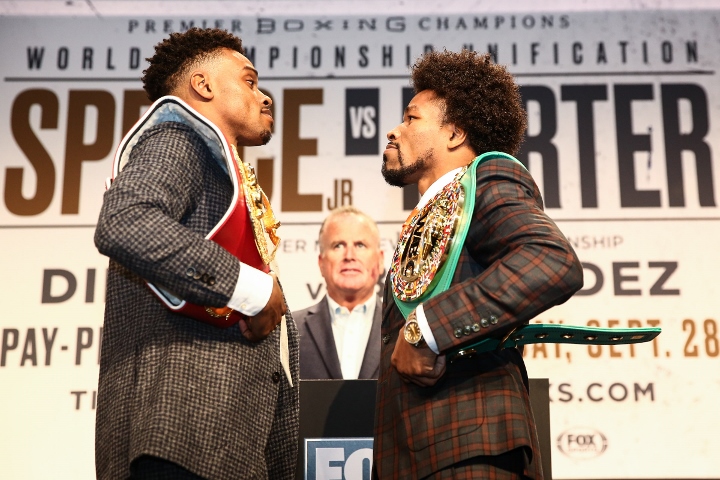 The scene unfolded far different for Porter than the weigh-in for his last fight. The 31-year-old Porter had to trim his hair March 8 to make weight for his title defense against Yordenis Ugas.

Benavidez is a 10-1 favorite to win back the WBC super middleweight title from Dirrell. The WBC stripped Benavidez of its 168-pound title a year ago because he tested positive for cocaine.

Dirrell won the then-vacant belt by beating Turkey’s Avnil Yildirim (21-2, 12 KOs) by technical decision February 23 at The Armory in Minneapolis. That fight was stopped in the 10th round due to a cut over Dirrell’s left eye, which was caused by an accidental head-butt in the ninth round.

Below are weights for the two other FOX Sports Pay-Per-View fights:

[QUOTE=mawoodhouse;20084802]Pfft..I refuse to pay for ANY fight no matter how big, its extortion. Why pay when there is always free streams out there, dont make sense. If I cant find a free stream I pay $5 on a certain website…

I think with ESPN+ and DAZN... paying $75 for essentially two fights is overkill... when for $99 you can have lots of fantastic fights... I am not a huge fan of either of these guys but for $20 or so…

The fight is in AMC movie theaters for only $24 starting at 9 pm. I may opt for that tomorrow night

Spence is one of my favorite fighters right now. I have never seen a fight of his that was disappointing. Sure the Mikey fight wasn't a brutal KO, bit still good to see Spence ply his trade. Add Porter to…