For now, boxing fans must settle for watching Thurman’s close wins over those two fellow former 147-pound champions. Showtime will replay Thurman’s 12-round, unanimous-decision win against Porter and his 12-round, split-decision defeat of Garcia back-to-back, beginning Friday night at 10 p.m. ET/PT.

Both of those fights were broadcast by CBS, Showtime’s parent company, from Barclays Center in Brooklyn.

Thurman-Porter was a “Fight of the Year” candidate in 2016. A then-unbeaten Thurman retained his WBA welterweight by topping Porter on all three scorecards in June 2016. 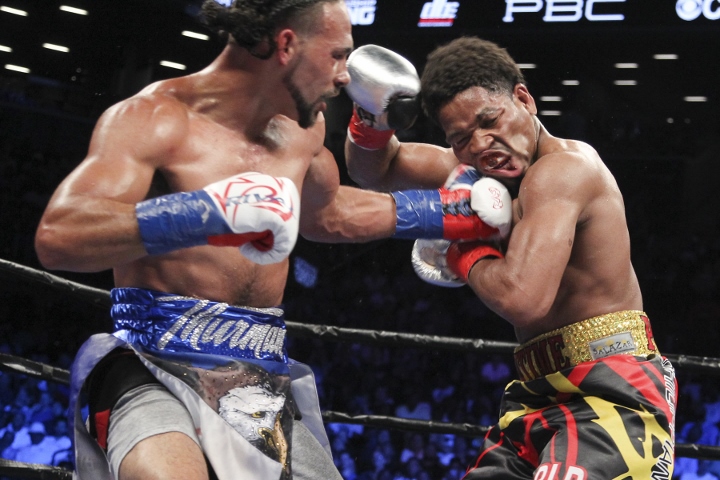 Each judge – Eric Marlinski, Waleska Roldan and Steve Weisfeld – scored that bout the same, 115-113 for Thurman.

“It was a tremendous fight,” Thurman said right after defeating Porter. “He’s a great warrior. … He had great offense, but I had great defense.”

Las Vegas’ Porter had hoped Thurman would’ve traded with him more than he did.

Thurman-Porter attracted a peak audience of 3,940,000 and an average audience of 3,100,000. It was the first boxing main event CBS televised in prime time since Leon Spinks upset Muhammad Ali by split decision to win the WBA and WBC heavyweight titles in February 1978.

Angel Garcia, Danny’s father and trainer, accused Thurman of running throughout their 12-round fight. Thurman thought he beat Garcia convincingly.

“The judges are the judges,” Thurman said in the ring after his narrow win. “I thought I out-boxed him. I thought it was a clear victory, but Danny came to fight. I knew when it was split and I had that widespread [score of 116-112], I knew it had to go to me.

“I was not giving that fight away. I felt like we had a nice lead, we could cool down. I felt like we were controlling the three-minute intervals every round. My defense was effective. He wasn’t landing.”

Thurman, I always book the door for you

Who gives a damn about replays on TV anymore when they can just google it and thousands of replays are plastered all pcer youtube at their pleasure of viewing.

Didn’t know networks still did “replays” or “re-airs.” Isn’t everything already available on demand online or something? Doesn’t take much to find those fights online with a click of a button.

Replaying Thurman fights on Showtime is a convincing sign that Showtime is going out of business, changing their name to *****ime...what a fuking JOKE!

Pacquiao won against a defective Thurman. It remains to be seen if Thurman can make it competitive against Porter or Garcia now. Thurman aint gonna disclose to the world if he's a shell of his former self, because he'd be…