Shields: It Was Crazy For Rigondeaux To Fight Lomachenko At 130

That ambitious move proved to be too much for Rigondeaux, who declined to continue after the sixth round in part due to a hand injury. That technical-knockout defeat in December 2017 remains the lone loss on Rigondeaux’s record.

“He had no business fighting Lomachenko at 130 [pounds],” Shields told BoxingScene.com on Thursday before a press conference at the Renaissance Allentown. “That was just insane. That was crazy. I talked to him about that and he said, ‘I know, I know.’ But he listened to everybody but himself. He should’ve never been in the ring with Lomachenko. He’s way too small.” 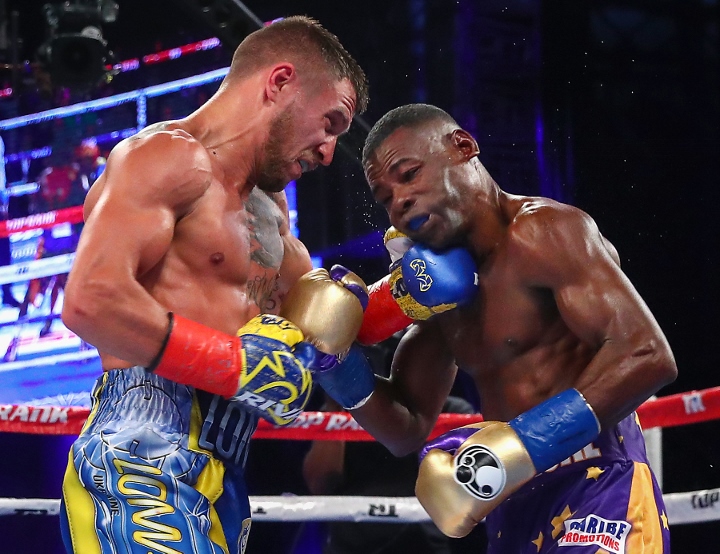 Rigondeaux had boxed only once at the featherweight limit of 126 pounds and almost exclusively at 122 pounds prior to challenging Lomachenko for his WBO junior lightweight title. Ukraine’s Lomachenko (14-1, 10 KOs), now a lightweight champion, had fought four times within the 130-pound division before beating Rigondeaux.

Lomachenko was way ahead on the scorecards when their one-sided contest concluded (60-53, 59-54, 59-54). Rigondeaux had a point deducted for habitual holding in the sixth round.

Miami’s Rigondeaux returned to the super bantamweight division for two fights after Lomachenko beat him. The two-time Olympic gold medalist won both of those bouts by knockout, but the former WBA/WBO 122-pound champion decided to drop down even lower for his fight Saturday night against Panama’s Liborio Solis.

“[Solis] looks pretty good, but with Rigo’s experience, he’s seen it all,” Shields said. “I think that’s gonna be the difference.”

Shields expects Rigondeaux to make an impact in his new division, even at the advanced age of 39.

“He still looks the same as he did way back,” Shields said. “It’s unbelievable that nothing has changed for him. Everybody that comes into the gym, they look at him and they say, ‘This dude’s not 39 years old.’ They think he’s younger because of the way he fights. He’s so smart and everything is intense. He loves to work hard. He’s an unbelievable fighter.”

[QUOTE=-Kev-;20378182]He’s a prizefighter, he wanted bigger fights, they were ducking him at his weight. He did what he had to do to get the money fight. Boxers are always going to go for the biggest money fight possible. Lomachenko was…

[quote=bob haymon;20381813]ellerbe is a known h0m0sexual. You just outed yourself as one of his butt boys. How many "favors" did you have to perform so he'd take you as his escort? [img]https://pbs.twimg.com/media/ef7v85uu8aemuhn?format=jpg&name=medium[/img][/quote] so you let ellerbe bend you over wow...…

[QUOTE=HaymonTheGod;20381351]was actually siting in 3rd row behind ellerbe for the tank vs gamboa fight lmfao... But i saw you in the parking garage begging for trailer park rent/meth money hahahaha.... Hope you got some change kid[/QUOTE] Ellerbe is a known…

[quote=bob haymon;20381195]you pirate all the fights. Your boyfriend mark ortega lets you borrow his bootleg dvd collection. You're the broke bum who had to work on street corners so you could afford nosebleed seats to the skank davis fight.[/quote] was…