Shields: If I Was Man, I'd Probably Be One Of Most Famous Boxers

On the same day McGraw made an impassioned plea during an interview prior to the women’s Final Four, Claressa Shields expressed her own views on the topic while she was interviewed as part of a media workout in Miami. Shields, the IBF/WBC/WBO women’s middleweight champion, is finishing up training camp there for her 10-round, 160-pound title unification fight against Germany’s Christina Hammer on April 13 in Atlantic City, New Jersey.

“I work hard, really hard,” Shields said. “If I was a man, I would probably be one of the most famous boxers out there. There is a gender gap. We all know it. I’m working towards changing that. We work hard, we get less money and less recognition, but the world is changing. We are changing it.” 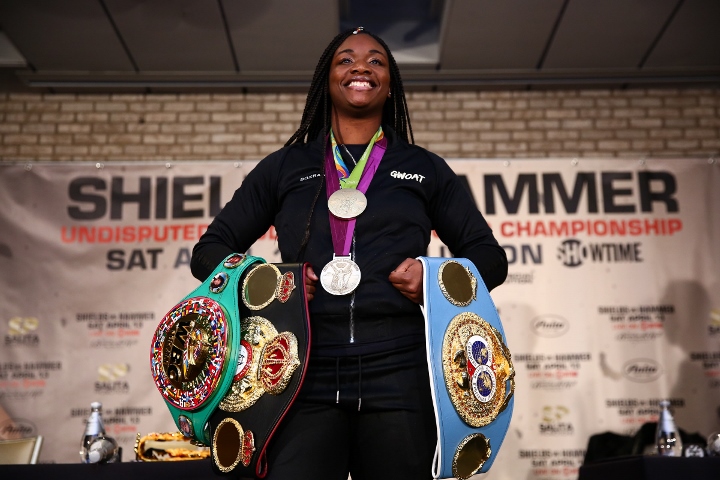 Shields-Hammer is widely viewed as the biggest women’s boxing match since Laila Ali stopped Christy Martin in August 2003. Ali, a daughter of Muhammad Ali and a super middleweight champion at that time, typically fought four weight classes above Martin, a women’s boxing pioneer who lost their bout by fourth-round knockout.

Shields and Hammer, meanwhile, are much more evenly matched.

“Hammer has been talking smack, but I’m not worried about her,” Shields said. “I’m just ready for a fight. She talks about a lot of stuff that has nothing to do with boxing. I’m waiting for her to say she’s gonna hit me with an uppercut or something, but it’s more of the same.”

Showtime will broadcast the Shields-Hammer match as the main event of a “ShoBox: The New Generation” tripleheader. The premium cable network’s three-bout broadcast is set to start at 9 p.m. ET a week from Saturday from Boardwalk Hall’s Adrian Phillips Ballroom.

[QUOTE=Jab jab boom;19643955]now you've been reduced to calling people teenagers and utilizing my lines to try and keep up. Hopefully you've learned your lesson, don't initiate interaction with me unless you want to be embarrassed.... Again. Lastly, the only reason…

[QUOTE=jdp28tx;19640633]But, Rousey was a fraud. UFC has a habit of promoting fraud fighters (after very few fights)as the greatest fighters ever and there fans always fall for it. My theory was Rhonda was hand picked and manufactured by UFC because…

[QUOTE=Straightener;19640612]It happening in all sports slowly WSL (world surf league) has the same prize money for men and females even though they surf less heats and have a poor following[/QUOTE] yea I dont think anyone takes surfin as a real…

aww bullsh[I]i[/I]t... 8 wins and only 2 kos with imo best win being adler. And she got put on her ass by that costa rican chick. then shows absolutely no class in defending dirrells uncles action when he punched uzcategui…

[QUOTE=Ray*;19644098]That's the thing, she seems to enforce the stereotype in regards to Americans. Why would anyone rate you amongst the best in the men's category? After only 8 fights, 2 KO wins. There are other women who are better than…