Shields: Hammer Will Have To Do Lot To Keep Me Off Of Her

Claressa Shields feels she has waited more than long enough for the opportunity to prove she is women’s boxing’s best middleweight.

Shields’ showdown with Christina Hammer was postponed from November 17 to April 13 due to Hammer’s undisclosed stomach ailment. Now that they’re closing in on their 10-round, 160-pound title bout, Shields is especially eager to hear the opening bell.

“This fight is long overdue and I’m just glad I’m gonna get my chance to show her what a real champion is,” Shields said during a media working Thursday in Miami. “Someone is going down on April 13 and I promise it’s not gonna be me.” 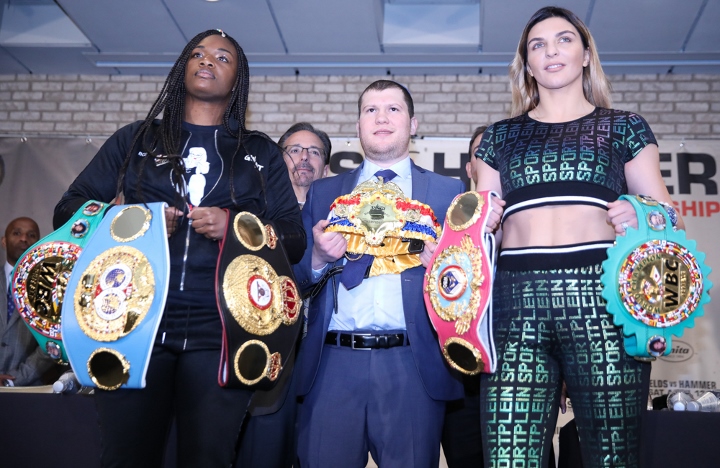 Shields, 24, is about a 4-1 favorite against Germany’s Hammer. The 28-year-old Hammer, a native of Kazakhstan, is much more experienced at the professional level, however.

“Christina doesn’t know what’s coming for her,” Shields said. “I’m gonna break that Hammer in half.”

Shields’ prediction aside, neither fighter is known as a knockout artist.

In eight professional fights, Shields has just two knockouts. Each of the IBF/WBA/WBC champion’s past four fights have gone the 10-round distance.

"When we’re in there, it’s about who punches harder,” Shields said. “This is a real fight. Just because she has height doesn’t mean she’s gonna dictate what happens. She’s gonna have to do a lot to keep me off of her.”

Showtime will televise the Shields-Hammer bout as the main event of a “ShoBox: The New Generation” tripleheader Saturday night from Boardwalk Hall in Atlantic City. The telecast is set to start at 9:10 p.m. ET from the Adrian Phillips Ballroom.

“I have two Olympic gold medals, three belts and more coming,” Shields said. “I’ll have all the titles at the end of the night on April 13.”

Hammer appears to have a decent ass

[QUOTE=AdonisCreed;19644313]Christina Hammer look pretty cute with that outfit on showing off them abs :)[/QUOTE] No sir. She is not cute at all. If you google her at weigh ins she has a box body. PASS

I hope hammer beats her, shields talks to much. There arent enough woman boxer out there so yea i too would call myself the greatest of all time when there is no competition lol. If she loses, i hope shes…

[QUOTE=mrlopez;19644255]Have a feeling shields is over aggressive and Hammer stops her[/QUOTE] I can seriously see this happening! Lol