While her victory over Hammer on Saturday night didn’t draw more viewers than Shields’ prior performance on Showtime, the viewership was higher than Showtime’s first four “ShoBox” telecasts of 2019. Each of those four shows aired on Friday nights. 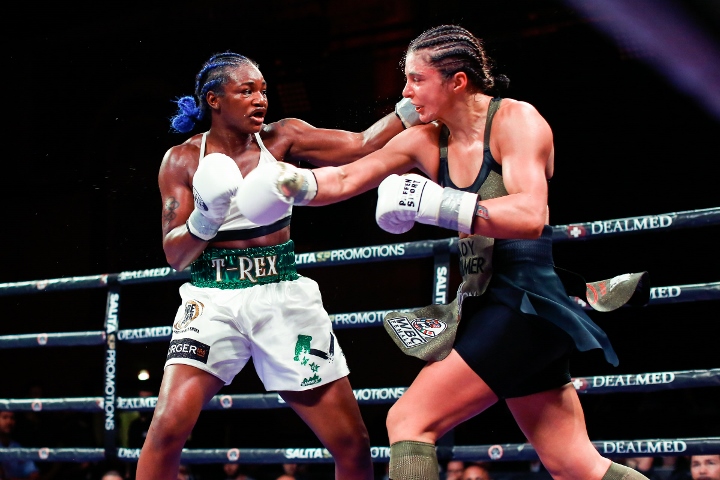 Saturday’s viewership also was the second-highest for a “ShoBox” broadcast in the past two years, behind only Shields’ defeat of Hanna Gabriels last year. Her win over Hammer was about as thorough as her victory against Gabriels last June 22.

Shields settled into a comfort zone following the first few rounds and completely out-boxed the previously unbeaten Hammer in the main event of a “ShoBox: The New Generation” tripleheader from Atlantic City, New Jersey.

The two-time Olympic gold medalist won eight rounds on all three scorecards. Two judges scored the completely one-sided eighth round 10-8 for Shields, who won 98-91, 98-91 and 98-92.

Her convincing victory supported Shields’ stake to her proclaimed position as the best women’s boxer, pound-for-pound, in the sport. The viewership figures weren’t quite as persuasive as the judges’ scores.

The bout between Shields (9-0, 2 KOs), of Flint, Michigan, and Hammer (24-1, 11 KOs, 1 NC), of Dortmund, Germany, was promoted as the biggest fight in women’s boxing history because it featured undefeated middleweight champions.

Her victory made Shields women’s boxing’s undisputed middleweight champ. She also joined IBF/IBO/WBA/WBC/WBO welterweight champ Cecilia Braekhus as only one of two women to own at least four recognized world championships in a weight class.

This promotion also was considered an advancement for women’s boxing because it was the first title unification fight broadcast by a premium cable network in prime time on a Saturday night in the history of women’s boxing.

Shields-Hammer faced competition Saturday night from one boxing broadcast (FS1) and one boxing stream (DAZN). Only one of those main events, DAZN’s stream of the Jaime Munguia-Dennis Hogan 154-pound title bout, was offered at least partially at the same time as the Shields-Hammer match.

No surprise that was a very busy sports night from NBA Playoffs, to a GREAT UFC PPV Card, as well as a PBC Card on as well on FS1 and the Munguia Card on DAZN. Impossible to watch everything that…

It was a strong performance by Shields. Shame that more people didn't watch.

[QUOTE=Motorcity Cobra;19663171]Damn! More than Canelo & AJ's last fights on DAZN combined!! Claressa "A-side" Shields. GWOAT![/QUOTE] Lol no one cares about Clarissa Shields. If u wanna see women who draw watch ufc. On top of that shields fight was boring…

The card was terrible, the worst card of the year. Showtime like HBO aren't making money on boxing. They'll be out of the sport in a couple of years. Showtime could have put on a blank screen and got those…

There was some pretty steep competition Saturday night. DAZN, FoxSports1, and the UFC all had cards on. Not to mention the Houston Rockets vs Utah Jazz. The numbers are good for a woman's fight, and a Shobox card, but lowered…