As much as Shawn Porter would love a second run at Keith Thurman, he’s not confident of such a rematch taking place any time soon—or at all.

The former two-time welterweight titlist remains in a holding pattern, eager to get back in the ring but forced to wait out both a global health crisis to end and the title picture to take shape before learning how he fits in. Porter (30-3-1, 17KOs) has long ago earned a reputation for taking on all comers, but is currently sitting on a split decision loss to Errol Spence (26-0, 21KOs) and unsure of his next move.

The setback snapped a four-fight win streak which included a second title reign, all coming on the heels of a hard-fought 12-round defeat to Thurman (29-1, 22KOs) in their June 2016 thriller. Thurman went on to become a unified titlist before sitting out for 22 months due to multiple injuries. The 31-year old from Clearwater, Florida resurfaced in 2019, edging out Josesito Lopez before suffering his first defeat in a split decision loss to Manny Pacquaio (62-7-2 39KOs) last July. 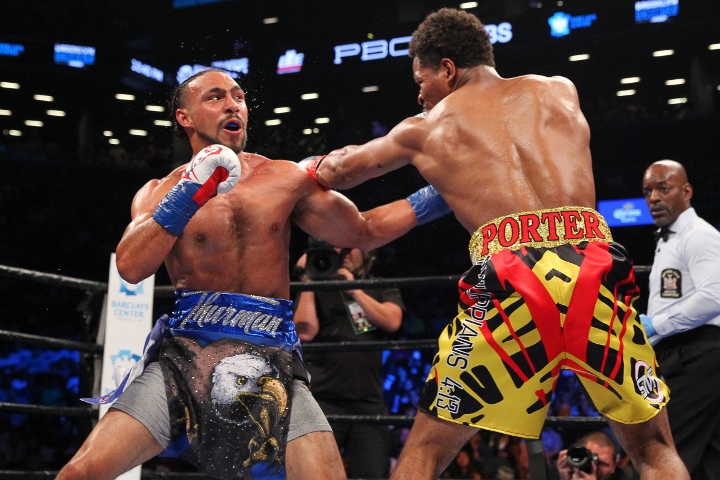 Thurman has expressed interest in a rematch with Pacquiao even as a first fight back, otherwise something along the lines of the ‘get-back’ variety. Another grueling 12-round war with Porter wouldn’t quite fit the bill.

“I’m not sure,” Porter admitted on the prospects of a second fight happening in a recent interview on Impact Network’s Stars and Champions: Special Edition series. “Keith has been through a lot in and out of the ring, with injuries and things of that nature.”

Porter’s loss to Thurman came roughly two years after his first title reign came to a close when he dropped a 12-round majority decision to then-unbeaten Kell Brook in August 2014. The 32-year old from Akron, Ohio—who now lives and trains in Las Vegas—bounced back from the Thurman setback with an impressive run including a unanimous decision victory over Danny Garcia (35-2, 21KOs) in September 2018 to being his second welterweight title reign.

One successful defense came of the run, a split decision win over Yordenis Ugas (25-4, 12KOs) last March before falling just short versus Spence in their Fight of the Year contender.

Win, lose or draw, Porter has proven a handful for any full-strength welterweight. He’s learned long ago not to hold his breath for any of the division’s best to run towards him unless forced to do so. In that vein, he believes a former titlist currently on the mend might look elsewhere for his next opportunity.

“I’m not sure [Thurman] can look at himself knowing that he may not be 100% and will be ready to take on a challenge like me,” insists Porter.

[QUOTE=T.M.T;20575826]Spence vs Pacquiao, Porter vs Crawford, D Garcia vs M Garcia and Thurman vs Ugas 🥊[/QUOTE] Ugas, tough fight for any Welterweight.

I'd rather see him fight Danny Garcia next.

Not many would want a rematch with Porter unless they lost a close one. Even beating Porter is a tough night at the office.