Danny Garcia landed a much higher percentage of power punches and landed the harder shots. Porter threw a career high 96 punches in round 8. A fight broke out after four rounds: Garcia averaged 24 punches thrown per round in rounds 1-4 and 47 per round the rest of the fight. 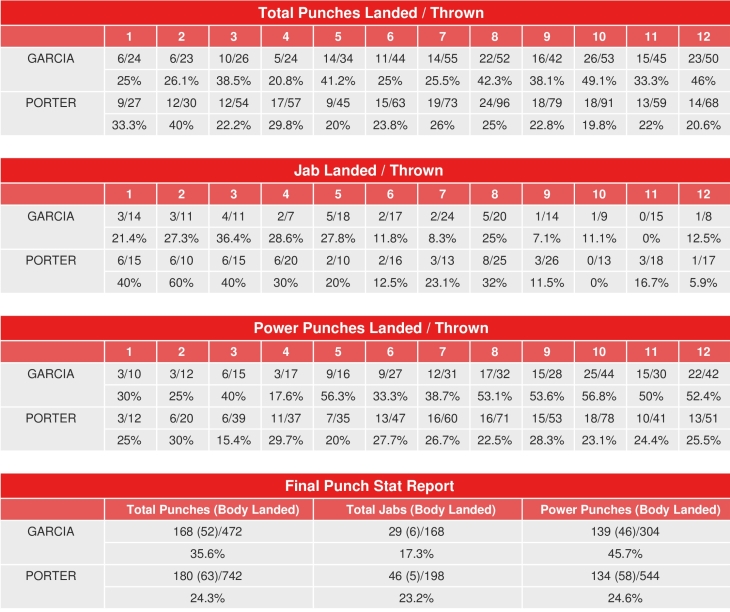 He lived up to his word by unanimously outpointing Garcia. Porter (29-2-1) received winning scores of 116-112 from judge Don Ackerman, and Julie Lederman and Eric Marlinski had it 115-113.

Porter held the IBF welterweight title from December 2013 to August 2014. Garcia dropped to 34-2.

Prior to Thursday afternoon's final press conference, Porter said he planned on using his movement to open up Garcia, while acknowledging he had to be wary of being caught in clinches or backed along the ropes.

He proved prescient, as almost from the outset, Garcia's plan of attack was to neutralize Porter's movement with clinches. Much of the first six rounds saw the two essentially engaged in a wrestling match.

It took until seventh for the fight to develop flow. The round began with referee Steve Willis calling for a timeout after Porter and Garcia bumped heads 29 seconds in, and the two exchanged heavy shots for the remaining 2:31.

Porter, the aggressor, had Garcia, the counterpuncher, forced into an aggressive fight. It stayed that way for the remainder, although Garcia began to re-implement clinches in the 10th round as a way to slow Porter.

[QUOTE=Eff Pandas;19088022]It was definitely close. Well the punch stats did say Porter won to as I read them to say. The overall numbers were mad close (Porter by 12 punches landed iirc w/o glancing at the link, but as I've…

[QUOTE=CubanGuyNYC;19088015]Cool. I thought it was close, but believe Porter won. [/quote] It was definitely close. [quote]Just one more reason why I don’t put any stock into punch stats. Anyway, good fight...and good discussion.[/QUOTE] Well the punch stats did say Porter…

[QUOTE=Eff Pandas;19087948]HBO tends to show landed punches by rd over the course of the fight, but they still overly focus on overall punch stats which is a silly thing to focus on. But yea no one really focuses on rd…

[QUOTE=CubanGuyNYC;19087725]The bold is an excellent point. Punch stats would make much more sense if they were displayed round by round (which they never are). It wouldn’t be enough to change the current system, but the stats would be far more…

[QUOTE=Eff Pandas;19087681]Again you are trying to equate something to punch stats no one is trying to give punch stats the power to do except dummies & Jim Lampley. Punch Stats tell the story of the fight. They don't tell you…