Shawn Porter on His Bond With Randall Cunningham

It comes as a surprise to those who are familiar with the athletic accomplishments of both men, but they both view their relationship as having a much higher significance.

Saturday night, Porter takes on fellow former 147-pound world champion Andre Berto in the main event on Showtime Championship Boxing presented by Premier Boxing Champions, beginning at 9:30 p.m. ET / 6:30 p.m. PT. And though Cunningham won’t be there in person, he and Porter’s entire extended family from Remnant Ministries in Las Vegas will be in his corner from afar. 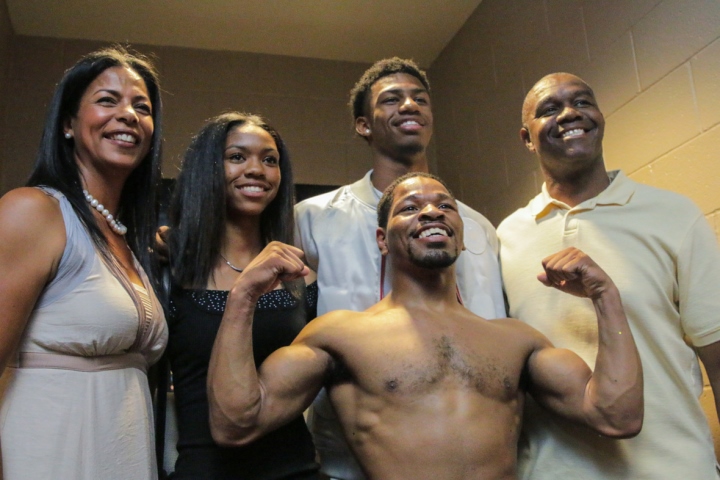 Porter and the former NFL Pro Bowl quarterback connected not long after he and his father/trainer Kenny Porter moved to Las Vegas full-time in 2013. A bond was formed almost immediately between Shawn and Randall. Porter attends church multiple times a week and has also served as an usher at Remnant Ministries for more than two years now.

“I only knew Randall Cunningham from football – a little bit from the Philadelphia Eagles, but a lot from the Minnesota Vikings,” Porter said. “I didn’t know that he had his own church. I don’t care who you are, if you’re a good pastor, you’re a good pastor. From the moment I watched him preach, I fell in love with his style of preaching.”

The relationship is meaningful in both directions, as Cunningham has gone out of his way to take Porter under his wing.

“Treating him like my little brother, because I don’t have any little brothers, allows him to be on the same page as me,” Cunningham said. “I try to impart the wisdom with some of the things I went through as an athlete, as well.”

That type of wisdom is especially important for Porter as he enters maybe the most crucial fight of his career.

Saturday’s clash in Brooklyn is what many typically call a “crossroads fight” between two veterans who can’t afford to swallow another defeat.

The 29-year-old Porter (26-2-1) is in the prime of his career and is ending a 10-month layoff after losing a razor-thin decision to Keith Thurman in last June. Thurman remained unbeaten and retained his WBA welterweight title. The Porter-Thurman fight was the 2016 PBC Fight of the Year, and a rematch is something no fight fan would object to seeing.

This could be the one hurdle Porter has to clear in order to make that rematch a reality, as this fight is an eliminator bout for the WBC welterweight belt that Thurman won after edging Danny Garcia via majority decision in March in a 147-pound unification bout. Everything Porter does at this point in his career is with the end goal in mind of becoming a two-time welterweight world champion.

Cunningham compares what Porter faces now to what he and his Philadelphia Eagles teammates stared down entering the NFL playoffs in 1992.

Despite massive individual success early in his tenure as the Eagles’ starting QB, including winning the Pro Football Writers Association MVP award in 1990, Cunningham’s postseason résumé was lacking, going 0-3 in the playoffs from 1988-90. In 1992, the Eagles finally broke through, netting the franchise’s first playoff victory in 12 years before bowing out against the eventual Super Bowl champion Dallas Cowboys in the divisional round.

Cunningham’s greatest postseason accomplishment came in 1998, taking the Vikings to the NFC title game, but he still speaks proudly of cutting through the built-up pressure in 1992 and finding a way to finally get that breakthrough win.

“A boxer can lose a certain number of matches, but then there comes a time where there’s that match where you just have to get that one,” Cunningham said. “Before he fights Berto, I’ll be able to tell him about the time we’d lost a couple of playoff games and things didn’t look good. We had to win. We got that victory, we all kept our jobs, got raises and things like that, just by getting that one victory. I think he’s at a point where he’s prepared to do that, and I think God is going to give him this one.”

And just for good measure, Pastor Cunningham and his entire Remnant Ministries family, which also includes former heavyweight world champion Leon Spinks and Hall of Fame referee Richard Steele, will have his back through prayer.

“We let Shawn be Shawn, we don’t treat him like a celebrity,” Cunningham said. “But when it’s time and he’s boxing? The whole church is praying for him. We let them know from the pulpit that we need to be covering Shawn.”

[QUOTE=Eff Pandas;17607370]Is this BPP trying to capitalize off the Shawn Porter is gay threads with talking of his "bond" with another man?[/QUOTE] Shocking to be honest.

Is this BPP trying to capitalize off the Shawn Porter is gay threads with talking of his "bond" with another man?

[QUOTE=Teetotaler;17606835]Is that porters mom on the left? She can get it[/QUOTE] thats Cunninghams wife you CH.INKY pac"Turd" fool.... she doesnt **** with 3 inch CH.INKYSs like you or manny hahahahah

[QUOTE=Teetotaler;17606835]Is that porters mom on the left? She can get it[/QUOTE] That's Randall Cunningham's wife.

Is that porters mom on the left? She can get it