NEW YORK – Shawn Porter convinced the judges this time around.

Two years after barely losing a decision to Keith Thurman in their WBA welterweight title fight, a determined Porter returned to the same ring at Brooklyn’s Barclays Center to win another 147-pound championship. Porter edged Danny Garcia by unanimous decision in an extremely competitive 12-round battle and won the vacant WBC welterweight title in the main event of 13-bout card that drew an announced crowd of 13,058.

The 30-year-old Porter (29-2-1, 17 KOs), a Las Vegas resident raised in Akron, Ohio, became a two-time welterweight champion. He held the IBF welterweight title for eight months before losing it to Kell Brook by majority decision in August 2014.

Philadelphia’s Garcia (35-2, 20 KOs) lost a close decision in a welterweight championship match at Barclays Center for the second time in 18 months. He lost the WBC title he failed to regain Saturday night to Keith Thurman by split decision in their 12-round, 147-pound championship unification fight in March 2017.

“I thought I did enough to win,” Garcia said. “It was a close fight. The judges didn’t give it to me. What can I say?”

The 30-year-old Garcia felt the effects of several head clashes with Porter, but he didn’t use those as an excuse for why he lost.

“I busted my head on the inside, plus a couple head-butts on my nose,” Garcia said. “It is what it is. This is boxing.” 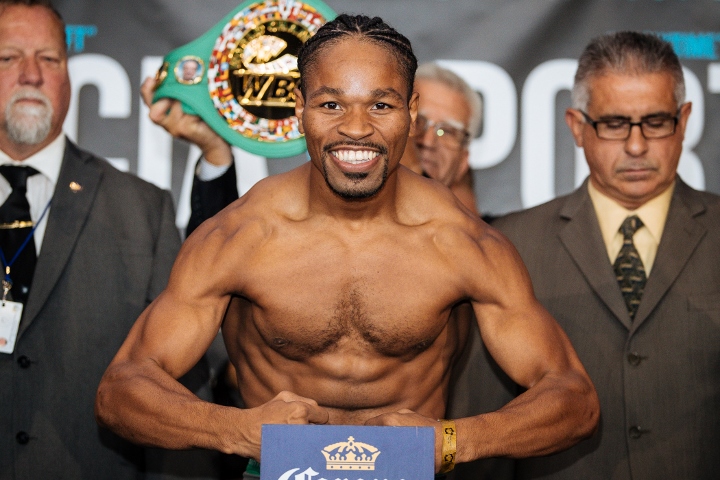 “He was throwing a lot [of punches],” Garcia said. “I had my defense tight, so it wasn’t effective. I thought I landed the cleaner shots. I thought I won this fight.”

Thurman, who beat Porter by unanimous decision in June 2016, gave up the WBC welterweight title late in April because a hand injury further delayed his comeback from elbow surgery in April 2017. Winning the WBC title could lead Porter to the Thurman rematch he covets at some point in 2019.

Errol Spence Jr., the unbeaten IBF welterweight champion, wasted no time entering the ring to challenge Porter once the newly crowned champion was announced as the winner. Porter said a clash with Spence would be “the easiest fight in boxing to make.”

For now, Porter is thankful he was able to out-point Garcia in a fight Porter suspected was close.

“I knew he was gonna be accurate,” Porter said of Garcia. “The game plan for me was to be accurate from the outside and show we could beat him without roughing him up on the ropes. … He tried to out-hustle me, mostly at the end of the rounds. He did a tremendous job.”

Garcia and Porter landed power shots in a 12th round each fighter must’ve felt he needed to win the fight. They threw hard shots at each other right up until the final bell sounded.

Porter appeared to stun Garcia with a right hand early in the 11th round, which left Garcia holding.

Porter and Garcia engaged in several vicious exchanges during the final minute of the 10th round. Garcia’s flush left hook just before that round ended was among the punches that brought an appreciative crowd to its collective feet.

Garcia caught Porter with a short left hook as Porter came forward, with his head down, around the 1:15 mark of the ninth round.

Porter drilled Garcia with an overhand right and then connected with a right uppercut about a minute into the eighth round. Garcia and Porter pounded each other to the body toward the end of the eighth.

Garcia complained to referee Steve Willis early in the seventh after absorbing a head-butt to his mouth. Willis granted Garcia a few seconds to recover and warned Porter for leading with his head.

Porter landed a left hand to the side of Garcia’s head right after that head-butt.

Porter’s pressure got Garcia against the ropes later in the seventh. Garcia tied up Porter to get out of that predicament.

Porter snuck in a right uppercut that caused Garcia to hold him near a neutral corner just prior to the halfway point of the sixth round. Porter pushed Garcia into the ropes late in the sixth, but Garcia tied him up and prevented Porter from working inside.

Garcia and Porter missed wildly with power shots in an exchange late in the fifth round, which lacked clean punching from both boxers.

Porter hit Garcia with two lefts to the body when they were wrestling in the center of the ring just prior to the midway mark of the fourth round. Later in the fourth, Garcia paid for lunging forward when Porter hit him with a short right to the side of his head.

Garcia clipped Porter with a short left hook about 55 seconds into the second round. Garcia tied up Porter and wrestled with him against the ropes with under a minute to go in the second.

Porter attempted to land overhand rights twice early in the first round, but missed wildly. Willis warned Garcia and Porter later in the first for hitting each other behind the head while they clinched.

Just before the first round ended, Garcia drilled Porter with an overhand right to the middle of his face as Porter attempted to land a right hand of his own.

What was with the Brooklyn hate for Thurman :lol1:? The inactivity? He was getting the second loudest boos, behind only Broner.

[QUOTE=SHO_RULEZ;19085375]That ref always kills me :lol1:. If theres a brutal exchange, he gets this EEEEWWW expression on his face! Or he has this smiling, excited look :lol1:.[/QUOTE] I would probably do the same thing. It always seems like dude is…

Kownacki's physique wont win him any bodybuilding titles, but I've seen way worse on a heavyweight. Kownacki has the height to carry it. Chris Arreola would come in really heavy, if he neglected his training. Funny late in the last…