Shakur Stevenson: Me & Tank Will Be Hell Of A Fight Later On Down The Line

They’re friends, and Stevenson respects what the unbeaten Baltimore native has accomplished thus far. But the WBO featherweight champion realizes it’s a fight fans will want to see if Stevenson succeeds within the 130-pound division and moves up to the lightweight limit of 135.

The 22-year-old Stevenson can’t envision encountering Davis any time soon, however, because he doesn’t believe Davis can make 130 pounds.

“I think ‘Tank’ is a real talented fighter,” Stevenson told BoxingScene.com, referring to Davis by his nickname. “He’s a beast. He’s ahead of all of us because he was already a world champion by the time I even turned professional. So, I think ‘Tank’ is a hell of a fighter. And I think if me and him ever wind up at the same weight, it’ll be a hell of a fight later on down the line. I think that’s the big fight. I think me and Tank, we’ll put on a show. But I just can’t see him being in my weight class anytime soon.” 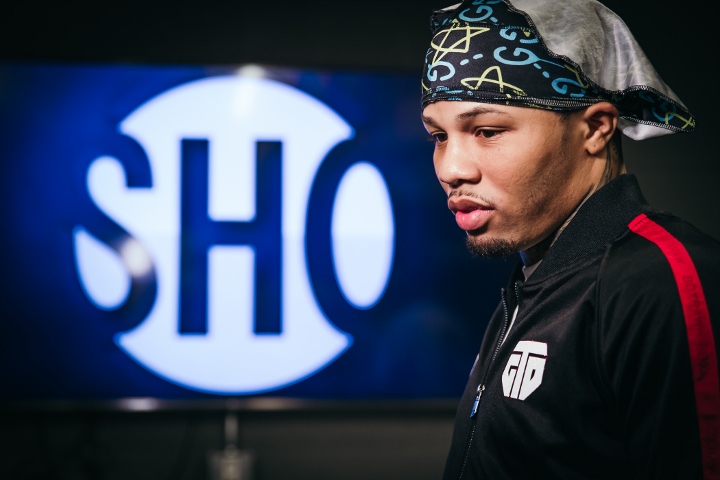 Stevenson isn’t convinced Davis’ fight with Leo Santa Cruz will actually take place for that very reason. Santa Cruz has pushed to make that bout happen, but the four-division champion has been adamant about it being contested no higher than the junior lightweight limit of 130 pounds.

Davis (23-0, 22 KOs) has agreed to face Santa Cruz (37-1-1, 19 KOs) at a maximum of 130 pounds in a Showtime Pay-Per-View fight sometime later this year. Stevenson still doesn’t think that it will come off due to Davis’ well-documented difficulties making weight.

The 25-year-old Davis initially was a 1¼ pounds overweight for his 135-pound debut December 28 against Yuriorkis Gamboa. Davis eventually weighed in at 134½ pounds for a WBA world lightweight title fight he won by 12th-round technical knockout at State Farm Arena in Atlanta.

“I don’t think Tank can make 130,” said Stevenson, who knocked out Puerto Rico’s Felix Caraballo with a body shot in the sixth round Tuesday night in Las Vegas. “Somebody gotta show me him making 130, and I’ll believe it then. Because I can’t really see him making 130 pounds. I feel like he just struggled to make 135 with Gamboa. He had to weigh in two times. The first time he missed weight. Then he had to go work the weight off.

“So, somebody gotta show me that he can make 130 for me to be able to even speak on [fighting him] too much. Or even speak on him and Santa Cruz, because Santa Cruz says he’s not fighting him at 135; it’s gotta be at 130. So, once they sign the contracts and the talk about the fight starts and all that, can he actually make 130?”

Santa Cruz, who won the WBA “super” 130-pound championship in his last fight, is the opponent Stevenson (14-0, 8 KOs) most wants to face in the division in which the 2016 Olympic silver medalist made his debut against Caraballo (13-2-2, 9 KOs). The Newark, New Jersey, native won’t want to fight Santa Cruz if Davis defeats him, thus he hopes their fight falls apart over Davis’ inability to make 130 pounds.

“If he’s struggling to make 135, and we don’t know if he’s still growing or what’s going on with him, who knows?,” Stevenson said. “So, until I see him make 130, I can’t really speak on him. Until then, I’m still gonna try to steal his fight with Santa Cruz, take his fight away from him.”

Stevenson intends to vacate the WBO 126-pound crown if he can’t secure a title unification fight with England’s Josh Warrington (30-0, 7 KOs), the IBF featherweight champ. With Warrington apparently committed to facing China’s Can Xu (18-2, 3 KOs), the WBA’s secondary 126-pound champ, in his next fight, Stevenson seems likely to remain at 130 pounds for his next bout.

Tank will be a heavyweight by then.

How about you and Gary Russell since you were in the same division until you moved up? How come he was never mentioned. All Talk, Shakur