The X-ray taken on Stevenson’s left hand at a Las Vegas hospital came back negative. The unbeaten WBO featherweight champion suffered this minor injury while landing a left hand on Felix Caraballo’s head in the fifth round of their junior lightweight fight.

His injury isn’t expected to keep Stevenson out of the gym long.

“I hurt it a little bit, but I’m all right,” said Stevenson, who knocked out Caraballo with a body shot in the sixth round. “It’s not broke. I can move it.” 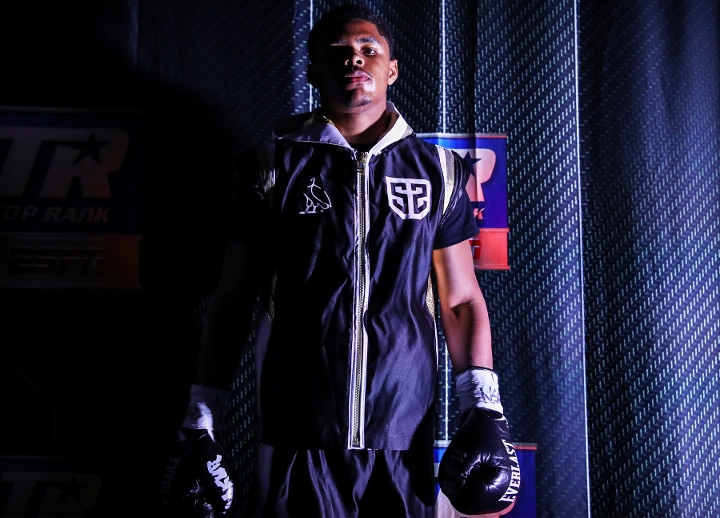 Stevenson needs to rest his hand, but he told BoxingScene.com that he still expects to fight again in September. That could change, but September is the time frame that has been mentioned to Stevenson by his handlers.

Stevenson shook his left hand after hitting Puerto Rico’s Caraballo at one point in the fifth round, but he continued using it. The Newark, New Jersey, native ended their fight with a hard left to Caraballo’s body.

The 22-year-old Stevenson (14-0, 8 KOs) battered Caraballo (13-2-2, 9 KOs) throughout an entirely one-sided main event ESPN televised from MGM Grand Conference Center. The 2016 Olympic silver medalist dropped his overmatched opponent in the first round and in the sixth round of a 130-pound, non-title fight that was scheduled for 10 rounds.

Referee Tony Weeks stopped the action at 1:31 of the sixth round, after Stevenson’s hard shot to Caraballo’s body sent him to his gloves and knees, writhing in pain.

Stevenson, who was consistently listed as a 100-1 favorite, isn’t sure if he will remain at 130 pounds for his next fight.

The skillful southpaw says a title unification showdown with England’s Josh Warrington (30-0, 7 KOs) is the only fight that could make him return to the featherweight division. Warrington is committed, however, to facing China’s Can Xu (18-2, 3 KOs), the WBA champion, in his next fight.

Shakur Stevenson hand is good, he going to comeback again in September without issue. :boxing:

Shakur you need to swing at softer targets like women, just like you did in Miami, or a defense-less individual on the ground where can take your time to aim. Shakur you are a punk.

He could have beat him with one hand..... Guy posed zero threat

Got injured after beating a pedicab driver...

Im so skillfully good comment. Common kid you havent beaten anyone yet. You are starting to talk as much as Tank, Lopez , Haney, and Ryan.