NEW YORK – Bob Arum and some of the promoter’s company men thought Shakur Stevenson moved too fast by taking on Christopher Diaz in just his 11th professional fight.

The 21-year-old Stevenson simply moved too fast for Diaz on Saturday night. The youthful southpaw’s superior speed and intelligence enabled him to pick apart a tough, determined Diaz throughout their 10-round featherweight fight on the Terence Crawford-Amir Khan fight at Madison Square Garden. 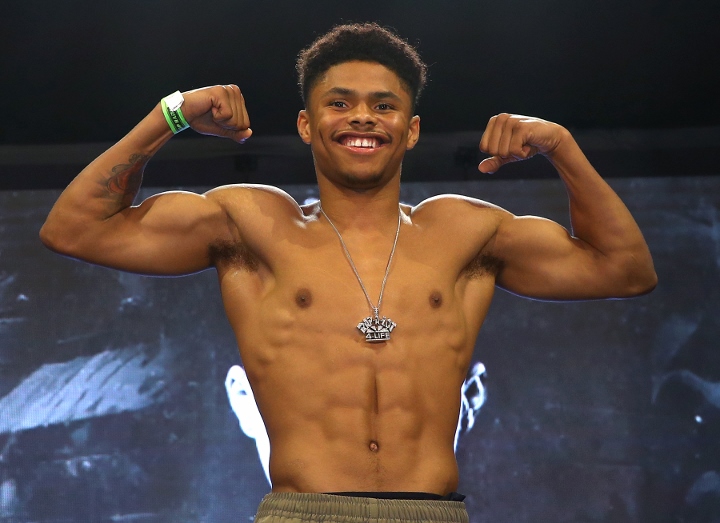 The 24-year-old Diaz (24-2, 16 KOs), of Barranquitas, Puerto Rico, lost a lopsided decision for the second time in his past three fights. Last July 28, Japan’s Masayuki Ito (25-1-1, 13 KOs) dropped Diaz in the fourth round and went on to win the then-vacant WBO junior lightweight title.

Diaz switched trainers after that loss – from Raul Rivas to Freddie Roach, who predicted Diaz would beat Stevenson easily.

Stevenson seemed content to coast to a convincing victory during the 10th round. He mostly moved around the ring, smiling at Diaz.

When Stevenson jumped up on the ropes after the final bell sounded, boos could be heard among the cheers inside The Garden.

Stevenson spent the seventh, eighth and ninth rounds landing to Diaz’s head and body. Diaz pressed forward, yet had little success connecting with anything significant because Stevenson slipped many of his punches.

The rugged Diaz tried to rough up Stevenson at the start of the sixth round. Stevenson then connected with a straight left hand that buzzed Diaz.

An assertive Stevenson continued throwing combinations to Diaz’s head and body in the sixth round, which backed Diaz into the ropes.

Stevenson ripped Diaz with left uppercuts on the inside during the fifth round, when he also landed several hard body shots.

A straight right hand by Diaz about 1:10 into the fourth round moved Stevenson into the ropes. Stevenson landed a combination to Diaz’s head and body in the fourth, but Diaz continued to come forward.

Stevenson shoved Diaz to the canvas early in the third round, which drew a warning from referee Gary Rosato. Stevenson’s hand speed and accuracy made it difficult for Diaz to get off punches for much of the third round.

A straight left hand up top by Stevenson backed up Diaz late in the third round. Diaz waved Stevenson forward, but he couldn’t land anything significant of his own.

Rosato warned Diaz early in the second round for hitting and holding Stevenson. Later in the second, Stevenson hit Diaz with two straight lefts to his body.

Stevenson landed an overhand left in the first round. He connected with a straight left to Diaz’s body a few moments later.

Tim Bradley has Shakurs rod in his mouth, bottom line he stunk the joint out and the place was booing, people on their cell phones bored, like watching Floyd, only when he was 40, WHACK....

Keith Idlec can’t help himself but write bozing articles from the last round to the first? IDK why he does that as it’s a really messed up way to call a fight?!

Timothy Bradley said Shakur beats all of these guys, Cruz, Warrington, Russell, & Valdez. I don’t see it yet. I think he needs a few more fights still.

[QUOTE=DeeMoney;19676630]Ugghhhh ESPN needs to get over there overhead camera; just stick with the standard view and let us enjoy the fight, not letting the director show off his artsy skills.[/QUOTE] Yeah one thing about HBO. The production of their shows…

[QUOTE=DeeMoney;19676630]Ugghhhh ESPN needs to get over there overhead camera; just stick with the standard view and let us enjoy the fight, not letting the director show off his artsy skills.[/QUOTE] Thank you!! They are doing too much just keep it…