Serrano: Hardy is a Warrior, She Came And Stood For 10 Rounds

NEW YORK—It’s a testament to Heather Hardy’s toughness and grit that she went 10 full rounds in a fight where she looked to be done barely 90 seconds into her eventual loss to Amanda Serrano.

“Heather is as tough as they come,” noted Serrano, after dethroning Hardy via unanimous decision in their all-Brooklyn featherweight title fight Friday evening at Madison Square Garden’s Hulu Theater in New York City. “It was a great performance. She’s a champion for a reason.

“She came to fight, but I was the better girl (Friday night).” 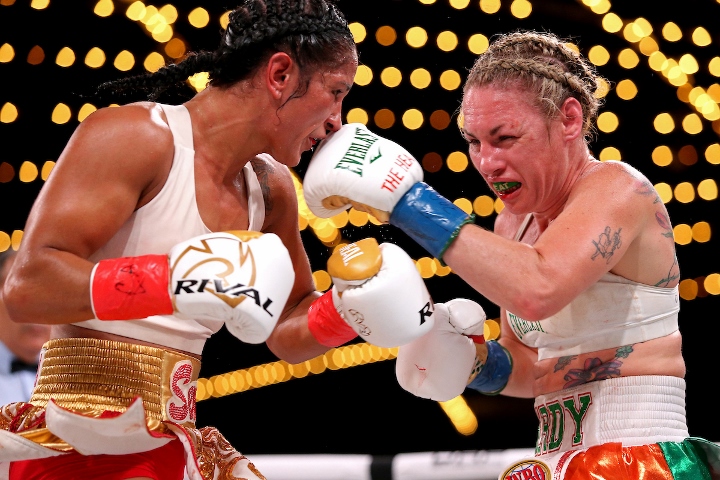 Serrano (37-1-1, 27KOs) has been the better boxer on every night since her lone loss, a 10-round decision to Frida Walberg more than seven years ago.

More so than rebounding, the Puerto Rican southpaw—who lives and trains out of the Bushwick section of Brooklyn—made boxing history. Having won her first title prior to her aforementioned loss to Wallberg, Serrano has claimed titles in six more different weight division amidst her current 22-fight win streak. Her fifth overall title—an 8th round stoppage of Dahian Santana in April 2017—already established the all-time mark for any female boxer or any male or female from Puerto Rico, twice adding to her own record in her two fights prior to her long-awaited showdown with Hardy.

Serrano’s most previous outing came in this very venue, needing just 35 seconds to blitz through Eva Voraberger this past January to claim a 115-pound title, just four months after a title win at 140 pounds over Yamila Reynoso. It appeared that she was in for another quick night at MSG’s Theater, as Hardy (22-1, 4KOs) was stunned in the opening round and spent the final 40 seconds of the frame fighting on survival instincts.

That the 37-year old from the Gerritsen Beach section of Brooklyn not only braved the stand but went 10 hard rounds with one of the very best in the sport today further validated why Serrano sought her title.

“I felt it,” Serrano said of a possible second-straight 1st round knockout. “But I have to applaud her. Heather is a warrior, she came and stood for 10 rounds.”

She is the best!! Now I want to see her against the Mexican barbie make it happen please!!:boxing::boxing:

Told you guys, Hardy is as tough as they come. She's as tough as Paige VanZant - they can take some really bad ass kickings and don't quit easy.

Haney should've been fighting on their undercard since they sold all the tickets.

Yeah, I thought the fight was over in the first. Hardy showed incredible resilience.