Sergey Lipinets had to settle for a lengthy delay in returning to the ring, along with a two-week postponement and an opponent change.

By the end of the night, he also had to settle for a 12-round majority draw versus late replacement Custio Clayton in their interim welterweight title fight. Judge Glenn Feldman had Ontario’s Clayton winning 115-113, overruled by matching tallies of judges Tom Schreck and Don Trella who had the contest scored 114-114 even in an entertaining battle Saturday evening from a crowdless Mohegan Sun Casino in Uncasville, Connecticut.

Lipinets fought the best way he knows how, immediately going into stalker mode against an unengaging Clayton who took the fight on short notice in place of Kudratillo Abdukakhorov (visa issues). The unbeaten welterweight from Ontario—whom represented Canada in the 2012 London Olympics—fought exclusively behind the jab in round one, representing all eight of his punches thrown in the frame in what marked his first career fight outside of his native Canada.

Clayton landed his first power shot in round two, a right hand which Lipinets absorbed and continued moving forward. The former junior welterweight titlist from Beverly Hills by way of Martuk, Kazakhstan was effective with his right hand, his weapon of choice in round three as well.

Lipinets intensified his attack in round four, working the body of a fleet-footed Clayton who struggled to get his offense untracked to that point. That trend changed late in the round, when Clayton was able to score with a series of right hands to the midsection of Lipinets whose offense suddenly shut down.

Clayton rode that good fortune into rounds five and six, using lateral movement to force Lipinets to follow him around the ring and then planting his feet long enough to let loose the occasional right hand.

Lipinets resumed his stalker role at the start of the second half. Clayton used his jab to create space and his feet to keep out of harm’s way, though Lipinets was more effective in cutting off the ring as had been the case in the previous two rounds. Clayton connected with a pair of counter right hands in the final 0:30 of a round largely controlled by Lipinets’ aggression.

Both fighters had their say in a high-contact round nine. Clayton connected with a right hand that opened up work downstairs, to which Lipinets immediately responded with a body attack of his own. A right hand upstairs by Lipinets was met with a counter shot from Clayton along the ropes. 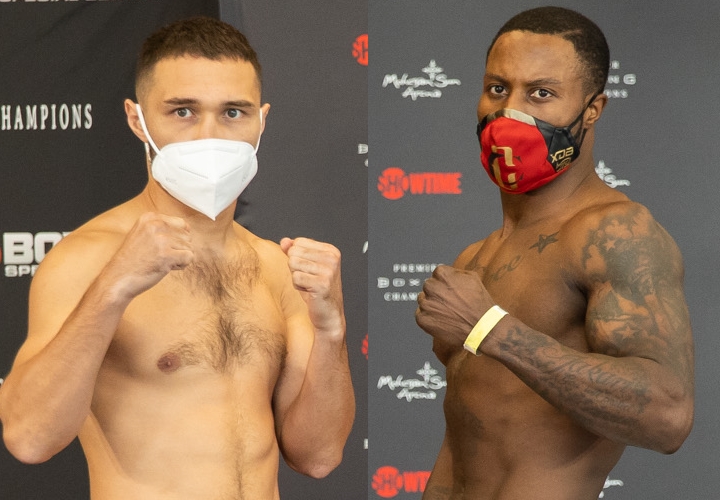 The championship rounds proved just as competitive. Clayton was mobile for much of round ten, working mostly behind the jab whileLipinets stood in center ring trying to pin down a moving target.

Clayton took the fight straight to Lipinets at the start of round eleven, sticking his jab in his opponent’s face as a table setter. Lipinets struggled to keep pace, playing defense against Clayton’s left hand but with his offensive output dramatically decreasing from past rounds.

As much was detected by Joe Goossen, Lipinets’ world class trainer who urged his charge to not stop throwing punches in the 12th and final round.

The advice was sound but not entirely carried out, though credit to Clayton who continued to prove an elusive target at the start of the frame. Clayton settled in for the final minute, using infighting and subtle in-and-out movement to avoid Lipinets’ heavier blows. With the fight seemingly in the balance, both boxers fought on relatively even terms in the closing seconds of the contest which would ultimately end in a stalemate.

The late surge was enough for Clayton to avoid suffering his first loss, though not enough to pick up the biggest win of his career. The stalemate moves his record to 18-0-1 (12KOs).

The torment of the three ringside judges was well reflected in the Compubox totals. Statistically, Clayton edged Lipinets across the board in terms of total punches thrown (687-to-610), landed (247-to-175) and connect percentage (36%-to-29%).

However, the biggest difference in how they arrived at those numbers was in their mode of attack. Whereas Clayton’s punch output was jab heavy, Lipinets won the power game. The 31-year old former 140-pound champ and current 147-pound contender landed a respectable 42% of his total power punches (107-to-256), enough to where he built up a healthy lead on all three scorecards through nine rounds.

All three judges scored the final three rounds for Clayton, with Feldman awarding the final five to the unbeaten Canadian in reaching his official score.

Lipinets is now 16-1-1 (12KOs), unbeaten in his last four starts though failing to get a win when he needed it most.

“I don’t have a problem with the draw,” Lipinets said in his ever-improving English. “I thought I won, but maybe by a round. It was a close fight.”

At stake in Saturday’s fight was an interim welterweight title, where the winner would have been in prime position to challenge whomever prevails in the December 5 clash between unified titlist and pound-for-pound entrant Errol Spence (26-0, 21KOs) and former two-division titlist Danny Garcia (36-2, 21KOs).

Instead, Lipinets will have to figure out another way to get in line for a crack at the division’s elite. For now, he’s willing to go the same exact route.

“I am fine with a rematch for the interim title with Clayton,” Lipinets insisted.

His opponent was equally as receptive.

"I showed the world that I’m not just a guy from Canada,” said Clayton. “I proved I’m a good fighter. People will have to respect me a little bit more.

“If Lipinets wants the rematch for the interim title, we should be able to make that happen.”

I had Clayton by 3. I think underdog status didn’t help him as he probably lost a few close swing rounds that I scored as draws. It was a really good 2 styles fight so I’m glad the scoring was…

Very close fight. Defence vs agressivity, power punches vs jab. Draw was a good call, although an argument can be made for a 115-113 either way.

It’s too bad pro judges can’t appreciate a masterful boxing performance when they see it. Clayton won that fight, 7-5 or 8-4. He clearly outboxed Lipinets who basically plodded forward throwing body punches all night. He also landed the harder…

As much as I like Lipinets he got handled in that fight.

I enjoyed it very much, Clayton a last min sub did great!