Saunders: I Was Offered 1.5 Million For Golovkin, Not 4 Million

“I’ll go to America but these Americans have got to stop offering me s*** money to fight, people keep saying I got offered $4m to fight him. If I got $4m to fight Golovkin, I would be fighting him!” explained Saunders.

The WBO World Middleweight Champion was speaking to Kugan Cassius yesterday and revealed: “They offered me $1.5m for what? To go in someone’s back yard. Alright Lemieux done it… Look where he is now… No belt and no ranking!” 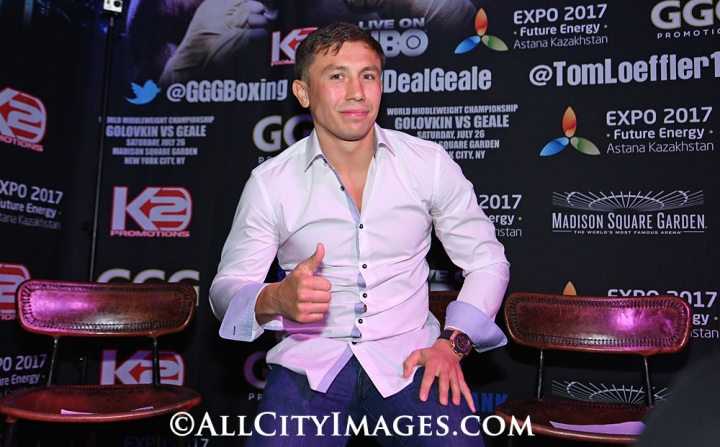 Before potential summer showdowns against the likes of Golovkin, Saunders has his first defence against ‘Mad’ Max Bursak on April 30 to contend with.

“I want to be rewarded. I fought Andy Lee and took my chance. If you beat GGG by 2/3 rounds you’ll get robbed. Let him come here… I’ve got to have one thing going by way, the only thing I want is home advantage,” said the slick southpaw.

See Saunders v Bursak up close and personal for just £33.50 via Eventim – or subscribe to watch live on BoxNation.

Oh dear, enough childish posturing, it is very dull. Billy Joe Saunders...? Is he good enough to beat a genuine champion at this time? I don't think he could beat Eubanks junior anymore, I think Eubanks junior would start faster…

[QUOTE=kafkod;16582662]Yet every thread I see you posting in, whatever the topic, you will always find a way to include attacks on Golovkin and his fans in everything you say. The post you linked to earlier is an example of that.…

[QUOTE=aboutfkntime;16582513]Well, you have stated on numerous occasions that you highly doubt Ward/Kovalev will ever happen, and when you made those comments you were insinuating that Ward would avoid Kovalev. You know that is true, and you know that I can…

[QUOTE=kafkod;16582057]I said I would give [B]Ward credit for beating Kovalev[/B] if he does it. That was it.[/QUOTE] Well, you have stated on numerous occasions that you highly doubt Ward/Kovalev will ever happen, and when you made those comments you were…

[QUOTE=aboutfkntime;16581904]Correct, you went there to bash Ward. Like you always do. Which just so happens to be the EXACT same thing that are whining about here, you genius LMAO[/QUOTE] I said I would give Ward credit for beating Kovalev if…