Saunders: I Don't Blame Golovkin For Not Facing Me

WBO super middleweight champion Billy Joe Saunders is not angered that he never secured a fight with Gennadiy Golovkin.

At one point they were both undefeated world champions at middleweight.

And while there were minor talks, the fight never came together.

Saunders would eventually move up to 168-pounds and capture the WBO title at the weight. 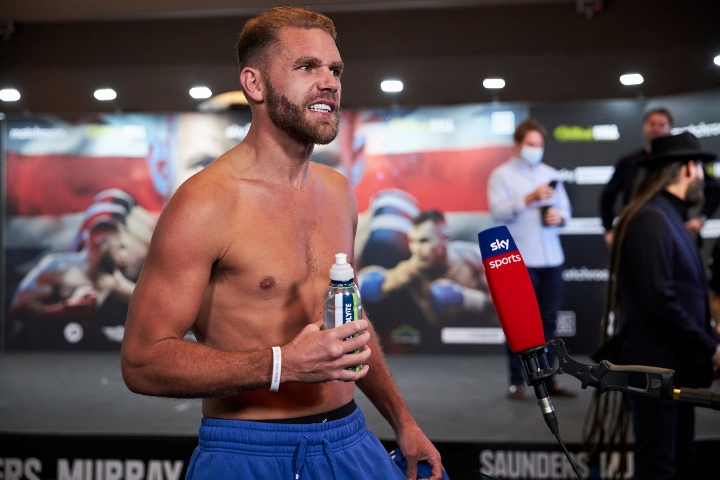 Saunders failed at securing Golovkin in the past, and doubts that he could land him in the future.

"I think Golovkin is now at the age. - he's 37, 38 - you've got to look at his age creeping in and how he fights with his face," Saunders told Sky Sports.

"I've had 29 fights, but out of them 29 fights, I have I been hit by 10 clean punches. Does he want somebody with not many miles on the clock, good with his feet, southpaw, slick, around him at that age?

"If I was in his shoes, probably not, but you've got to take your hat off to him. He has done really well for himself, he has been successful. I can't run him down for saying he is ducking Billy Joe Saunders or ducking this man and that man. He is done everything asked of him and I can only respect that."

Golovkin is going to return on December 18th in a mandatory defense of his IBF middleweight title.

Saunders will return to the ring on Friday, when he faces Martin Murray at SSE Arena in Wembley.

The goal is to beat Murray and then land the winner of the upcoming clash between WBA super middleweight champion Callum Smith and Mexican superstar Saul "Canelo" Alvarez, which takes place on December 19.

And Saunders is hoping that Smith walks away with the victory.

"I really hope he does the job," said Saunders. "Listen, I like Callum, he's a great fighter and I think he's got the tools in his toolbox to do the job, if the game plan is right."

[QUOTE=Mindgames;20927953]I think Golovkins career was disappointing, he never lived up to the hype I agree.I dont think he was anything like the ducker Saunders is though. Golovkin would've fought Pirog.He beat Jacob's for me,beat Canelo in the first one.I thought…

[QUOTE=Gideon lock;20928981]Sort of shocking when you think of his predicted ability and shown skills his biggest enemy is his culture I think Billy as a man on his own volition would be able to take up the tough fights and.…

[QUOTE=steeve steel;20926417]Saunders' best win is a SD against Andy Lee...[/QUOTE] Sort of shocking when you think of his predicted ability and shown skills his biggest enemy is his culture I think Billy as a man on his own volition would…

BJS is the biggest fraud in history. He said Canelo should be permanently barred from boxing for failed drug test. Then he failed his own drug test but had endless excuses on why he really didnt cheat. Then he begged…