Chris Eubank Jr. lashed out at Billy Joe Saunders, who vacated his WBO middleweight title after coming under fire for failing a doping test in August.

Earlier this week, Saunders was denied a licence by the Massachusetts State Athletic Commission to face mandatory challenger Demetrius Andrade in Boston next week.

Saunders had tested positive for oxilofrine in a Voluntary Anti-Doping Association test (VADA). The stimulant is banned by VADA while it is prohibited only during competition by World Anti-Doping Agency and UK Anti-Doping. 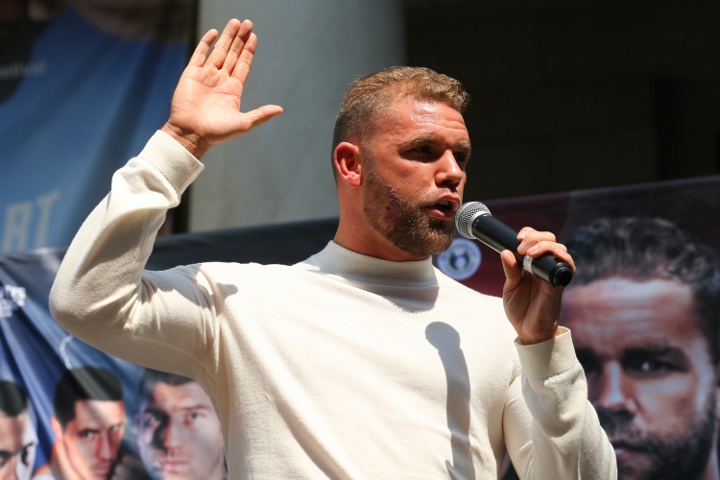 In order to go forward with a legal suit against the MSAC, the 29-year-old Saunders vacated the belt he won in 2015.

Saunders has denied any wrongdoing in the matter and said that the adverse analytical finding was the result of using a common decongestant nasal spray.

Several years ago, Saunders handed Eubank Jr. his first pro defeat with a twelve round decision.

"So Billy Joe Saunders, how long you been taking illegal substances for son? It’s funny how you were giving it to Canelo while you were cheating with drugs yourself. Enjoy your time out and don’t worry the belt you’ve been stripped of will be in more deserving hands soon enough," Eubank Jr. stated on social media.

It didn't take long before Saunders fired back.

"You will never win a world title belt, you're British level tops... steps up & gets banged every time you bum. Go play with your dad's knob," Saunders hit back.

But Eubank Jr. took that verbal swing on the chin, and swung back.

"I already have [won a world title] and I did it without using drugs and you’ve been ducking a rematch with me for years as you know what will happen to you. 100k fine for taking advantage of vulnerable people & now stripped of your title for cheating. Karma is a b*tch," Eubank stated.

[QUOTE=Chrismart;19189124]It was always going to be a stick his rivals were going to beat him with wasn't it. I haven't heard Murray say anything about it though, he's pretty classy if he hasn't. Eubank pushing the IBO is a little…

So saunders tells Eubank to do summat to his dad. Tells the commission to do summat similar. Films a guy in his car and forces him to strip....... I'm having my suspicions about billy joe

It was always going to be a stick his rivals were going to beat him with wasn't it. I haven't heard Murray say anything about it though, he's pretty classy if he hasn't. Eubank pushing the IBO is a little…

Just goes to show you can't inherit class. Sr would never kick a man when he's down.