Saunders: Beating Callum Smith Should Make Me 'No. 1' at 168

BILLY JOE SAUNDERS wants an all-British clash with Callum Smith to get the recognition he believes he deserves.

The Hatfield fighter became a two-weight world champion as he comfortably out-pointed the limited Shefat Isufi to win the vacant WBO super-middleweight title on Saturday.

Promoter Frank Warren has backed him to become “the British fighter of his generation” and finish his career off like Joe Calzaghe. 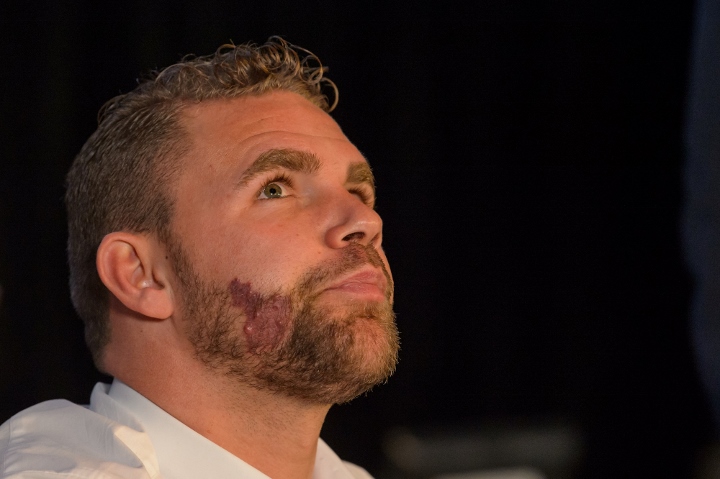 Saunders, 29, is eyeing up a unification clash with WBA champion Smith, although it won’t be an easy fight to make as both are with rival promoters and broadcasters.

“Callum is not a bottle job, he will step up and take the fight, I would like to test myself against him,” said the unbeaten Brit, who moved to 28-0 on Saturday.

“He is out in June and I want to be out in September. I think he is one or the best at the weight.

“But I rise to the occasion, this performance a 6.5-7 out of 10 but if it helps me make the Smith fight and I win it then it should make me the No1.

“I am willing to make the unification with any super-middleweight.”

Saunders endured a 2018 to forget after a £100,000 fine for mocking a drug addict on video before a failed drugs test lost him a £2m pay day against Demetrius Andrade.

He relinquished his WBO middleweight crown but became the first boxer from the travelling community to win world titles in two weights at Lamex Stadium – the home of Stevenage FC - on Saturday.

Saunders was a level above Isufi throughout as he picked apart the German-based Albanian with ease.

He would face a much stiffer test against someone of Smith’s calibre.

A fight with WBA, IBF and WBC middleweight king Saul ‘Canelo’ Alvarez remains an attraction but an unlikely deal to secure.

While promoter Warren is keen to do a deal for a rematch with Chris Eubank Jnr, who is now mixing it at super-middleweight.

Warren sees Saunders finishing off like Calzaghe, who he guided to the top of the super-middleweight division.

Calzaghe didn’t become a global star until he battered Jeff Lacy in 2006 after 17 defences of his WBO title.

The Welshman went on to beat the likes of Mikkel Kessler, Bernard Hopkins and Roy Jones Jnr to put his name in the argument of who is Britain’s best ever.

But Saunders accepts he is an unattractive prospect for the big names and now has to stay busy after long periods of inactivity during his career in a bid to get the top fights.

He added: “Who needs a slick southpaw who doesn’t get hit, a very good mover and can fight?

“They look at me and think I’m not a big draw.

“I just want the big fights because it gets a bit frustrating when you know how good you are but you can’t be let loose in this era of good fighters.

“What I’ve learned from 2018, is that I need to stay active and stay in the gym. I need to be more active."

[QUOTE=Mexican_Puppet;19766368] Billy needs a great win before a fight with Canelo, a fight with Smith or Benavídez. He need to prove that he is that good, at this moment is only the hype of fans from U.K But he is…

[QUOTE=HeadBodyBodyBody;19765570]I hear what you're saying. However, I don't think there is much appetite for a third fight with GGG atm, and Jacobs' performance was disappointing - he had his shot and stood there at the end saying, 'I'm a winner…

Time for BJS to shut the critics up again, I remember in 2017 when he schooled the s*** out of Lemieux, the forums were lighting up about how Lemieux was gonna knock BJS the F out etc etc. Saunders has…

[QUOTE=Scopedog;19764490]I hope it happens so Smith can crush him[/QUOTE] Remember when Lemieux was supposed to do that?

[QUOTE=skinnystev;19764629]imagine the plodding stumblebum alvarez trying to land his clumsy potshots on BJS[/QUOTE] It's beautiful imagery, isn't it?