The cancelation of his mandatory defense against Demetrius Andrade hasn’t cost Billy Joe Saunders his WBO middleweight title – not yet, anyway.

WBO president Paco Valcarcel told ESPN.com on Tuesday that his organization will sanction an Andrade-Walter Kautondokwa fight for its interim middleweight title because it will afford Saunders an opportunity to appeal the Massachusetts State Athletic Commission’s denial of his license application with the WBO. The Massachusetts commission’s decision Tuesday caused the cancelation of the Saunders-Andrade fight October 20 at TD Garden in Boston.

Eddie Hearn, Andrade’s promoter, had arranged prior to the Massachusetts commission’s meeting Tuesday for Kautondokwa to face Andrade in the event Saunders couldn’t get a license. 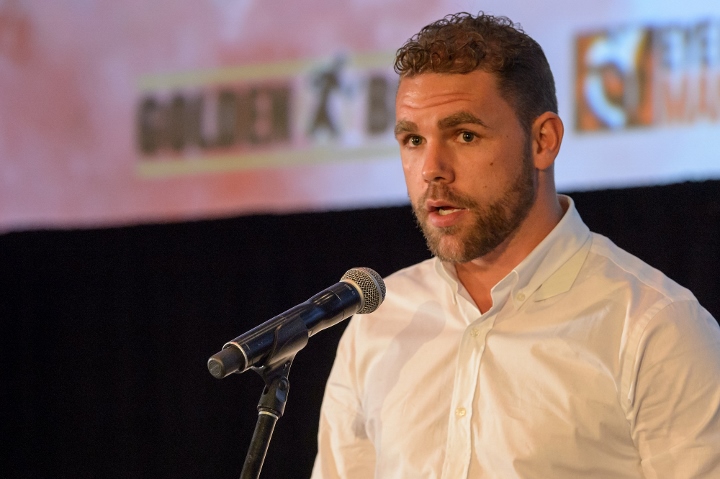 Namibia’s Kautondokwa (17-0, 16 KOs) is ranked No. 2 among the WBO’s middleweight contenders. Andrade (25-0, 16 KOs), a former junior middleweight champion from Providence, Rhode Island, is the WBO’s top-ranked 160-pound contender and was the mandatory challenger for Saunders’ title.

If the WBO denies Saunders’ appeal, the winner between Andrade and Kautondokwa will have his interim status removed and become the WBO middleweight champion. DAZN will stream the Andrade-Kautondokwa fight in the United States.

The Massachusetts State Athletic Commission denied Saunders’ license application because Saunders tested positive for oxilofrine in an exam administered by the Voluntary Anti-Doping Association on August 30. Oxilofrine – a stimulant that can aid an athlete’s stamina, among other things – is on VADA’s list of banned substances.

England’s Saunders (26-0, 12 KOs) and Andrade signed agreements to adhere to VADA’s testing standards. Saunders and his handlers argued that he tested positive for oxilofrine because it’s present in a nasal spray Saunders used, but the Massachusetts commission still denied his license application.

Andrade was willing to fight Saunders despite his failed test, but the 2008 Olympian will have to settle for a lower-profile opponent.

Whether this PED ordeal will cost Saunders his WBO title remains to be seen, but it’ll definitely cost him what would’ve been a career-high payday for the Andrade fight. The package for the 29-year-old Saunders’ side to face Andrade would’ve been worth roughly $2.3 million.

[QUOTE=shaheed1972;19181403]Naw, this is actually how an interim title SHOULD be used. When championship in limbo or if a champion is injured & on the shelf for period of time, this prevents the title from being held up. Once the situation…

Yah sure.. tell em to suck ur prick than try to appeal their decision. Sure sounds like BJS wants this fight. I said from the jump that he would find a way out of this fight. Taking a nasal spray…

bily hoe needs a lesson learned & Boo Boo should whoop his a*s so he can learn that lesson....LOL :yeah:

[QUOTE=champion4ever;19181800]The moral of the story is if you want to fight in the U.S. Then you must abide by its rules and regulations and bylaws. It's nothing more or nothing less and besides, I don't recall all this sympathy for…

[QUOTE=jmrf4435;19181210]Its insane they will not let him fight. More american bias, and corruption[/QUOTE]The moral of the story is if you want to fight in the U.S. Then you must abide by its rules and regulations and bylaws. It's nothing more…